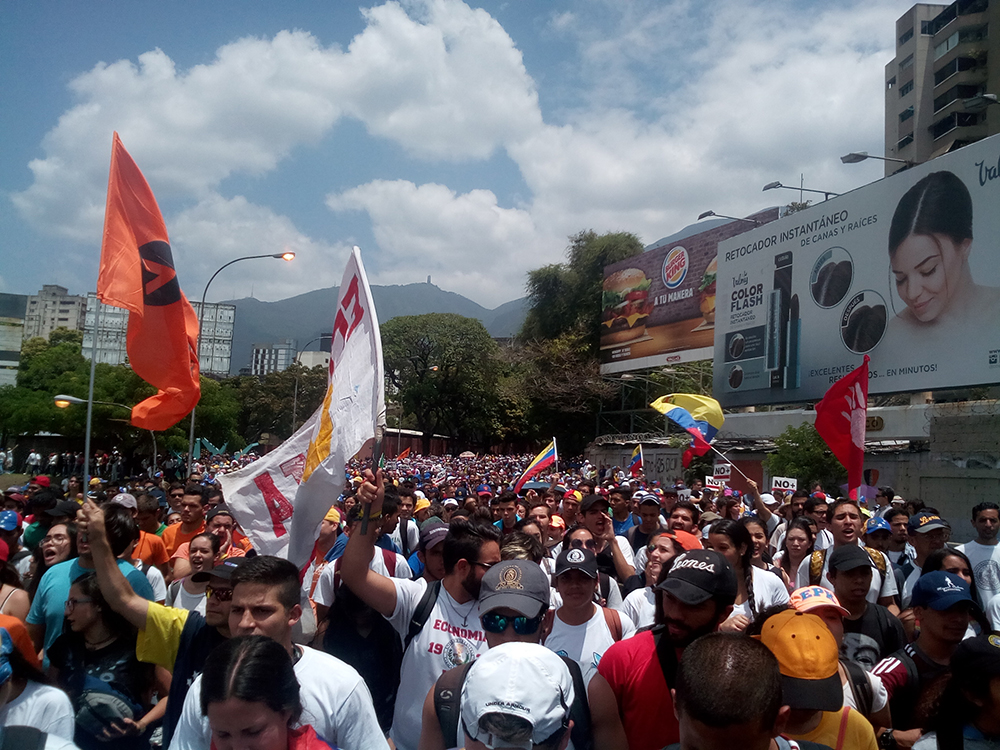 How does a country go from the being the richest of its region to absolute collapse? Why have people been protesting daily for over two months? Moreover, why do people continue to demonstrate when over 60 people have been killed by State security forces? How bad can the situation get? What is next for Venezuela?

Although the current crisis has a clear political origin, its roots go deeper and are the consequence of a mistaken political economic policy that has led to Venezuela’s deepest socio-economic crisis in modern history. The current protests were sparked when the Supreme Court decided to dissolve parliament and transfer legislation to itself, an act the Opposition considered as a coup. Nonetheless, people are demonstrating today not only for democracy, but also to have the possibility of a normal life, where buying food and medicine is not an epic achievement.

How bad is the economy? According to Professor Jose Manuel Puente, Visiting Professor at the Blavatnik School of Government, who recently gave a seminar on Venezuela: The Political Economy that led to collapse, the country’s economy is the only one in the continent that will face economic contraction for a fourth consecutive year. Furthermore, in the last three years, close to 30% of the country’s GDP has disappeared, causing a severe scarcity of basic goods and the highest level of inflation in the world.

Sometimes, when the magnitude of an economic crash is so great, it is hard to see its impact on everyday life. Well, according to an independent study conducted by three private and public universities in 2016 (the government has not released official data since 2015), the Venezuelan population lost an average weight of more than 8 kgs, while 82% are  below the poverty line.

But how does the country with the largest oil reserves in the world reach this point of economic crisis? If the Bolivarian Revolution did in fact bring its promised riches for all, then how did the country collapse? Why are people struggling to find food and medicine? Can it be explained by lower oil prices? Again, Professor Puente sheds some light on the subject. The collapse started before the fall of oil prices. The contraction of the economy started in 2013 with oil prices averaging over USD 100 a barrel due to currency controls, price controls, expropriations, corruption, lack of transparency, and irresponsible fiscal and monetary policies. Clearly, when 97% of exports are oil, any shock has an impact. But what Venezuela is currently experiencing is the result of negligent economic policy lasting for almost two decades, including the largest boom in oil prices in history.

The solution was worse than the disease

How has the government responded to the crisis? In the political arena, it announced a National Constituent Assembly without electing its constituents through universal and direct votes, and decided to withdraw from the OAS while continuing to imprison opposition leaders, ban them from running for office and destroy their passports (even when they were en route to the UN to denounce human rights abuses). By-the-book classical dictatorship.

As for the demonstrations, censorship over the coverage of protests has increased, as has the jailing of government opponents. In addition, security forces have killed dozens of people and injured thousands with tear gas bombs fired at very close range, illegal ammunition, and simply by shooting at demonstrators.

The Attorney General – one of the icons of Chavism – recently broke lines with the government when it intended to dissolve the National Assembly. This has created stark tensions within the ruling party.

Moreover, investigations from the AG have attributed direct responsibility to the security forces for the assassination of demonstrators. Although the Attorney General behaving as a non-partisan actor should not be surprising, given the institutional decay of the last years, it has been a surprise for Venezuelans.

Economically, the government has tightened controls on prices, distribution and any aspect of the economy that can be controlled. Furthermore, it pays one of the highest yields on national debt (State and National Oil Company) and prefers to pay money to Wall Street rather than import food and medicines for its population. And, ironically, the self-proclaimed socialist government has been most recently aided by one of the icons of capitalism: Goldman Sachs, who ­– clearly with no ethical remorse ­–  bought USD 2.8 billion (with an impressive 69% discount rate) in what Professor Hausmann has called “The Hunger Bonds”, giving oxygen to the dictatorship.

Instead of rectifying the economic policy, the government has increased the pace towards absolute destruction. The consequences will be felt deeply by all Venezuelans. The only hope for economic recovery is if there is a political change first, but will it come?

There is no clear answer. Like any crisis, the situation changes by the hour and casualties of young people like Miguel Castillo at the hands of security forces increase. I am optimistic that fractures in the government will increase and that with popular pressure on the government (demonstrations have, incredibly, not lessened) and a unified opposition, it’s only a matter of time until the country makes the transition back to democracy. Some benefits of this transition will be felt immediately, but reconstruction will not be easy, nor will healing the wounds of a polarized society and a ruined economy.

In the meantime, the international community should continue to put pressure on the government to call general elections that would allow the population to decide its own political fate. As for Venezuelans, within the country the pacifist struggle should continue to achieve peaceful change, and those abroad should create awareness on the heinous human rights violations happening back home.

Santiago Rosas is currently studying for a Master of Public Policy at the Blavatnik School of Government. He is a political and human rights activist and works as the Managing Director of El Hatillo's police force, Caracas.
Democracy and politics Economy
...
Integrity