They said she was cured 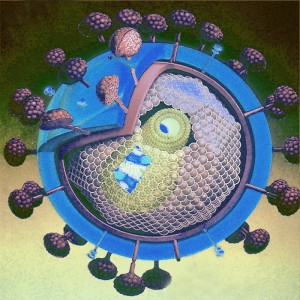 It was announced today that a child from the United States who was previously thought to have been cured of HIV has relapsed, and not only has the virus been detected in her body, but an associated decrease in CD4+ T cells has also been seen. She is now on anti-retroviral drugs (ARVs) again, and likely to be so for the rest of her life.

The so called "Mississippi baby" was born carrying HIV and treated with ARVs from only her second day of life. This treatment was discontinued after 18 months, and for over 2 years after that she remained free of detectable levels of the virus. Normally when an adult stops taking these drugs, there is a massive rebound in the level of HIV that can both cause damage to the individual and make them more likely to transmit the virus to others.

The original announcement and follow up paper in the New England Journal of Medicine (Persaud et al., 2013) was met with much fanfare. It forms part of a recent wave of highly publicised successes against HIV/AIDS, that seem to be encouraging a decreased sense of risk. Another example is the "Berlin patient", Timothy Brown, who was "cured" of HIV following a bone marrow transplant from a donor carrying a rare genetic mutation that inhibits the spread of HIV.

Highlighting these successes seem to be a path to continued public notice and funding for some researchers and lobby groups, but I have encountered a more blasé attitude towards HIV amongst teenagers and 20-somethings than was prominent even a decade ago. The availability of ARVs, coupled with a feeling that we almost have a cure, has led to me being told things like "HIV isn't really a big deal anymore". Until this moment it has always been the case the HIV prevention is better than cure (or treatment), and unfortunately nothing has changed. ARVs have side effects, the virus can develop resistance, and although HIV is now dealt with as a chronic condition in the developed world, it is an exaggeration to say people with HIV have a "normal" life or life expectancy.

While these cases are all interesting and can reveal important information, it remains unlikely that a "cure" for HIV is just around the corner. ARVs drive the virus into hiding, but where it hides remains a mystery. It was always possible (or in my view likely) that it was also hiding in individuals like the "Mississippi baby" and "Berlin patient". Many are working instead on a "functional cure", the idea that we might be able to keep the virus hiding so that it neither damages those infected nor spreads to others. These cases may be the first examples of such an advance, and understanding both why they were able to defeat the virus, and why it has now come back in one individual hold much promise. A functional cure might be the next big step forward, but it will still be years away, and avoiding infection remains by far the best option.
Health