Srebrenica: Remembering the human consequences of hate 25 years on 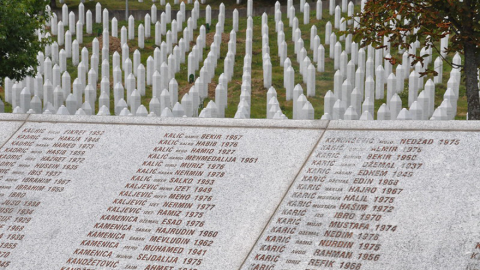 A couple of years ago I found a letter from the Red Cross dated 1997, responding to an enquiry from my mother. They had received her file on her missing brother who was killed during the Srebrenica Genocide in 1995 and confirmed they would undertake an investigation to find his body. “It’s to prove to everyone that I was the one who initiated the investigation,” she said.

Camil was her favourite amongst her five siblings. When his body was found, we felt lucky that only his head was missing, when the bodies of other victims were usually only found, if at all, in small pieces spread across several mass graves as a result of deliberate displacement by the Serb Army. Camil was murdered before he ever saw his newborn son.

Although I didn’t live in Bosnia during that period, the war has defined my life. I was two years old at its outbreak. My mother saved me and my brother from a city that would fall together with Srebrenica in 1995, when the Serb Army under the control of the so-called ‘Butcher of Bosnia’, Ratko Mladic, committed the greatest massacre in Europe since World War II. We fled to Munich where we lived in a train wagon, while my father dug sewage systems to provide us with a basic living. Despite my young age, I was conscious of everything – the murder of my father’s mother and my missing uncle.

Upon our return to Bosnia in 1998 we moved to Sarajevo instead of returning to our hometown due to the systematic displacement process. As my grandmother’s body was still missing, my father started digging around the location where she was allegedly shot in 1992 and found her in 2002 after finding two other skeletons. A decade after her murder, we buried her in our hometown. I still hear my aunt’s cries, touching the highest reaches of the sky, as people carried the remnants of her mother’s body to the grave.

In 2016, when I was translating testimonies about the war from survivors of the genocide to volunteers from London, an old man told me he witnessed my grandmother being taken captive by Serbs at the primary school. Allegedly, a Serb neighbour tried to save her and other captives. They were all killed. I carry this story as proof that not all Serbs are the same and that the war was too complicated to make generalisations, for I deeply hope for reconciliation.

In 2015 I had an internship at an institute for people in need of social care. The majority of patients were traumatised victims of war treated for post-traumatic stress disorder (PTSD), schizophrenia, or severe depression, and other health-related impairments. Their files told horrible life stories which proved that perhaps the only thing worse than war is the period after it.

One patient was treated for mental illness as a result of being forced by the Serbian army to rape his own mother. Due to measures in place to protect his identity, we didn’t know who he was. We would walk through the halls knowing he could be any of the patients, something that made me feel a mix of wonder and grief.

On one occasion the staff tranquilised a male patient who had caused frequent trouble. In tears, his visiting mother tried to justify his actions: “It’s not his fault! Chetniks [a Serb military group] raped me in front of him. He tried to protect me so they beat him. He would cover my naked body after they finish with his own shirt."

I felt as if all the pain from the entire universe aggregated in that very moment to remind me that innocent people, with no inherent connection to anything in the war, suffer the consequences of someone’s power struggles and ideology. In Oxford, I happened to share a flat with a Serbian woman who lost her brother during the Bosnian War. In an attempt to protect his son, who believed the propaganda and joined the Serb army, her father followed him, but failed to save his life. “He wished he died instead,” she claimed as she wiped away her tears.

That moment proved to me that there is no victory in war; everyone loses. Some more, some less and yet the grief resulting from the loss of a loved one is universal. Her story brought me back to the Srebrenica anniversary in 2003 and my uncle’s funeral. My mum and the other women covered their tearstained faces with scarves as male family members sealed the grave with soil, bringing some peace to our hearts. We shared this fate with thousands of families. Some still haven’t found any remains and keep praying for just a small fracture of bone to bury their missing sons, brothers or fathers.

I don’t remember the war, but I can testify
that its consequences haunt generations, even decades after. Every week around 11
July (Commemoration of the Srebrenica genocide) is filled with pain that could
have been prevented if humanity had been more decisive and intervened.

In the end, nobody gained anything but misery. Albert Einstein said: “The world is a dangerous place, not because of those who do evil, but because of those who look on and do nothing.” We must remember genocides like those of the Jews in the Holocaust, Bosniaks of Srebrenica and Prijedor, Tutsi in Rwanda, Serbs in the Independent State of Croatia (NDH) and countless other examples of murders taking place today, in the name of tribal superiority, nationalism, religion and other equally insidious forms of hate.

Let this 25th anniversary of the Srebrenica Genocide remind us that even decades after such massacres, the memories and tears are constant, the pain is universal. In the end, empathy is what makes humankind unique, but empathy without action is a hollow sentiment.

Aida Hadzic (MPP 2016) is an alumna of the Blavatnik School of Government.