Science and Public Policy core ends with a panel of experts 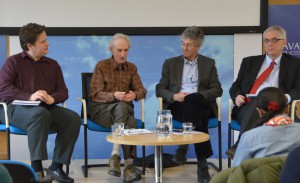 Core IV of the Masters in Public Policy (MPP) came to a close last week with a panel on scientific advice to government. We were delighted to welcome three of the UK's most esteemed scientists, all of whom have practical experience of giving advice to government. Lord Robert May FRS was the Chief Scientific Advisor to the UK government from 1995-2000, Lord John Krebs FRS was Chairman of the Food Standards Agency from 2000-2005, and Prof. David Clary FRS was Chief Scientific Advisor to the Foreign and Commonwealth Office from 2009 until 2013.

Over 2 hours of engaging conversation, we discussed examples of scientific advice to government, including Foot and Mouth Disease outbreaks in the UK, the emergency response to the Fukushima disaster, UK drug policy, and the L'Aquila earthquake. The panel shared their views on what went right or wrong in various cases and the lessons we could learn as policy makers from this.

The students pressed the panel on broader issues relating to scientific advice to government, such as whether it is ok to play politics with science, whether advisors can act as advocates, the role of the general public in the science/policy interface.

Following the panel there was a chance to interact with panel members one on one and get into some of the areas that specifically interest the first MPP cohort.

This was a great way to finish the Science and Public Policy core of the 2012/13 MPP by linking some of the theory learnt on areas such as energy, infectious disease, and modelling to real world policy decisions.