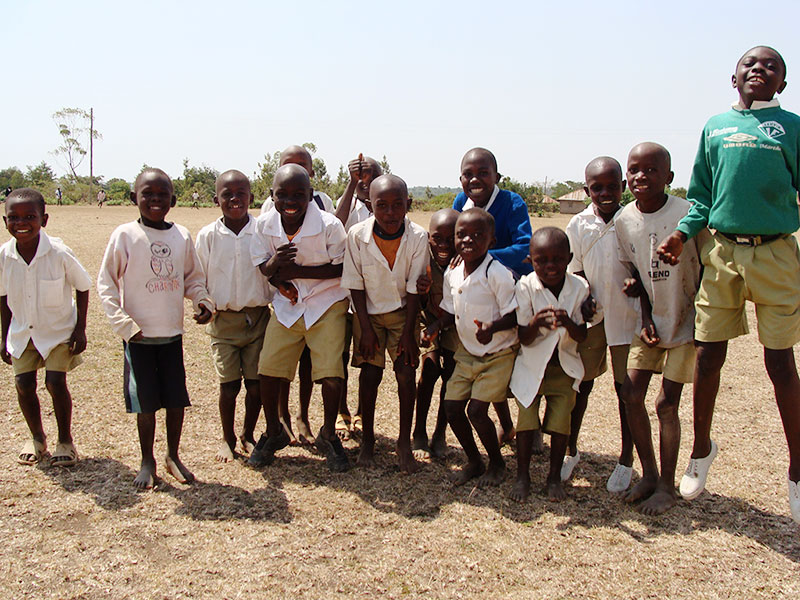 Pele, a seventeen year old Kenyan girl, is the oldest of seven siblings. She used to have an older brother but he died very early. And so did her father, leaving his seven children alone with their mother, who is suffering from severe medical conditions. With Pele being the oldest, that puts a lot of responsibility on her young shoulders. But she seems to have risen to the challenge. Even though she has to go to school and work hard to help her brothers and sisters, she still finds the time to vividly engage in a self-aid group of orphans. It is both touching and impressive to experience the courage and brightness of this teenager. She seems to have grown strong over her challenges when she explains that:

“It is good for the orphans to get together. Knowing that you are not alone with your problems can make you stronger. It gives you confidence. We help each other so that we are strong together.”

Unfortunately, there are many orphans where she lives. And most do not seem to possess Pele's kind of resilience. The district they live in is called Rarieda, a rural area from which one can sometimes see the famous Lake Victoria. It is a particularly poor area where water is scarce, and the HIV prevalence is estimated to be around 23% - three times above the national average of 7%. It is said that many of the orphans lost their parents to HIV, and carry the virus themselves. As if this was not enough, people are also constantly at risk of contracting diarrheal diseases, malaria, tungiasis, and many more communicable diseases.

The majority of households in this area has little money available to survive, but children like Pele and her siblings are particularly strained. Even going to school can create economic challenges to them, since they cannot invest the time spent in school for income generating activities. And some of them also need to walk for kilometers to reach the nearest water source and they do so either before or after school. With almost twelve hours of darkness per day throughout almost the entire year, some children struggle to complete even their most basic tasks.

Being a former British colony, Kenya requires children to wear a school uniform in order to be allowed to attend classes. This can become prohibitively expensive for the poorest within the community. But fortunately, most are resourceful and help each other out so that they can have access to their right of education. Others receive a donation for a school uniform. However, they often own no more than one uniform, that they need to wash every afternoon after school, hoping that it dries in time before the sun sets - or simply wash it as seldom as possible. And if the garments are torn, worn-out, or have holes, it typically stays that way because they do not have the means to fix it.

But most importantly, many are left without enough money to buy shoes. Some are lucky to have sandals. Children have to clean the schools’ pit-latrines which are more often than not found in very unsanitary conditions. And most do so barefooted, without gloves, using improvised and inadequate brooms. Shoes would make this task at least somewhat more bearable. But most importantly, only shoes are known to be effective in reducing the risk of being infested by the sand flea, which causes tungiasis. This flea burrows in the skin, where it grows to the size of a pea. It then often causes local pain and itch, that can be very debilitating. More importantly however, the infested region can also become super-infected with bacteria (possibly causing severe disabilities) and the flea is a known vector for tetanus, a potentially lethal disease. The flea sheds hundreds of eggs through an opening of his host’s skin. If it does that in the classrooms and playground of a school, its offspring will find scores of barefoot children to feast on (find out more about tungiasis on medscape). Hence, shoes would be a formidable piece of clothing to improve the quality of life of these children. If one was to prioritize - wouldn’t shoes be a better investment than a school uniform?

Furthermore, at least in elementary schools, the uniforms consist of short pants for boys and skirts for girls (in some areas, long pants are allowed for boys in secondary school). This might be fine on warm days, but people here can also experience colder days where short pants are generally not worn by those who have a choice.

Admittedly, Kenya has countless more pressing issues to deal with than discussing the pros and cons of school uniforms. But in the face of so much hardship, the question inevitably comes up, why life needs to be further artificially complicated by an imported tradition?

In high income countries, one strong argument in favor of uniforms is that poorer children are protected from discrimination if their parents cannot afford the latest fashion. But the distribution of wealth in rural Kenya seems to be rather homogenous and it is virtually impossible to spot Polo Ralph Lauren shirts anywhere in the district.

Another claimed benefit of the uniform is that it makes it easier to identify pupils if they are outside of school. But in rural communities people know each other rather well, and one should expect that teachers are able to recognize their pupils even without uniform. Also, why not just ask the child directly for the name of the school it belongs to? If anything, this it should know.

Similarly, it would also not prevent children from taking drugs due to shame of being recognized. In a rural setting, children are likely to be singled out by someone they know, with or without uniform. Also, truly addicted kids won’t cease their consumption simply because they wear a uniform, and the school is not the only social environment that affects the children.

Finally, another common argument is that school uniforms help bring discipline into the class. But experience from countries without school uniforms show that this goal can be achieved just as well without uniforms. And above all, it is questionable wether it is really more discipline what the country needs. Shouldn’t young Kenyans rather be brought up to look at authorities with a healthy amount of informed criticism rather than devote obedience?

Maybe school uniforms have a positive impact in cities such as Nairobi or Kisumu. But their benefit in poor, rural settings seems to be well inferior to its negative effects. It is impressive though, how strongly people hold on to traditions that never were their own but instead imposed by a colonial power. This is not just about school uniforms in rural Kenya. It is about post-imperial countries still wearing old chains without sincerely questioning their current presence - not just within the education sector. Kenya celebrated its 50th anniversary of independence from the British on 1 May 2013. Isn’t it about time that Kenyans should start to reassess their customs and traditions, and to dare letting go of those that are dysfunctional or even harmful to themselves? And while we’re at it - shouldn’t all post-colonial countries do the same if they haven’t done so yet?