To save itself, the EU must look east 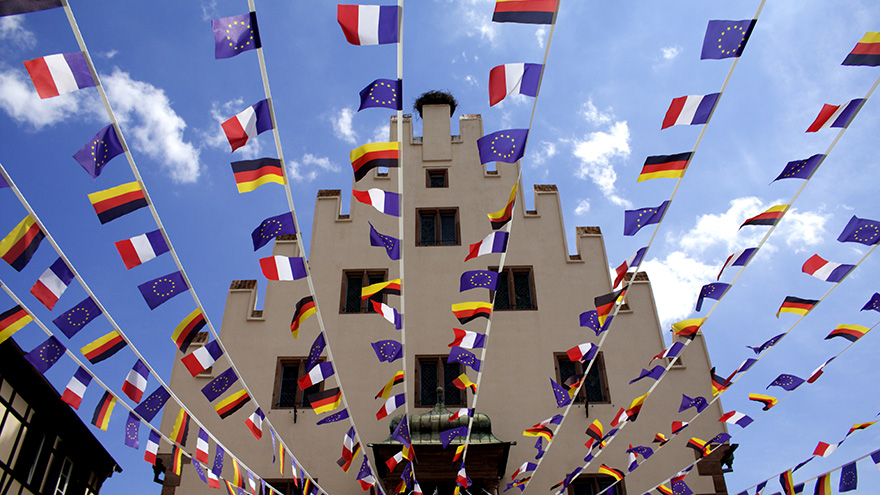 The people of the former Eastern Bloc know how a bad union can impact their lives, and consequently they see the immense benefits in their membership of a democratic, free and (relatively) prosperous union.

But recent years, possibly decades, have shown that the European Union is in trouble. Not only because it’s politically impotent – as crises have shown – but also because its public legitimacy seems to shrink ever further. To save itself, and to set a direction for the future, European elites must look to the east to find the narratives that can give Europeans a sense of community.

With 2017 looming just around the corner, the EU can look forward to another year of challenges. While the upcoming elections in Germany and France, literally the heartland of the European Union, might be a domestic matter, in our time no election is only a domestic issue any more. In both France and Germany, the elections are at least as much about the last years of European politics, as they are about domestic policy. And just as German and French politicians will be judged on European matters – ranging from economic policy to terrorism and migration – the outcome will be an indicator of how to further proceed with European cooperation.

Since the recent financial crisis turned into an economic crisis, there has been a growth in negative sentiment towards the political elites in Europe’s capitals, but especially against the elite in Brussels. Popular movements, often discredited as populists, have taken to the streets and caused the fall of governments all over the south of Europe. While Greece has suffered extreme economic losses, arguably because of the strict and unforgivingly unadaptable EU policies of austerity, other countries have experienced similar political and socio-economic crises.

Even today – almost a decade after the crisis hit – 43% of the youth in Spain is unemployed. As many blame the EU for not being able to fight extreme levels of unemployment, the EU has developed an unprecedentedly bad reputation amongst the Spanish. Support for the EU in Spain has thus fallen to almost half in only the last decade, and similarly it has dropped in many other EU member states.

The causes for this must be sought in Brussels and in the major European capitals, where political incapability has put the peoples of Europe off the Union, and made them fundamentally doubt its justification. If Europe can’t solve basic economic problems – the one thing that is at the heart of the EU, then what can it really do?

EU sceptics are nothing new

Smaller Nordic countries such as Denmark have had for decades a strange relationship with their membership of the EU; but as it’s clearly an economic positive for a small open nation, the membership just critically disliked – but never fundamentally challenged.

Equally, Britain – the first ever member which wants to divorce the Union since Greenland left in 1985 – has never really become a full-blown and wholehearted supporter of the political construct that is the European Union. Brexit now poses unprecedented challenges to the EU, both internally in the soon-to-be 27 member states, but especially externally to the rest of the world.

On the one hand it is crucial that the EU manages the exit of the UK well, keeping in mind what are the best interests of the EU as well as those of the people of the United Kingdom. On the other hand, with the fifth largest economy in the world and one of the most important military actors on the global security scene leaving, the European Union’s place in the world is challenged. Economically it is well positioned now, representing about 10% of the global population and accounting for more than 22% of the world economy. But it’s easy to realise that, due to immense growth in population in other places of the world, the demographic decline in Europe with ever older populations, and the strong economic and military growth in countries like China and India, the future of economic and military power lies beyond the traditional “West”. While Britain leaving the EU and travelling to unknown waters will prove challenging for the island(s), the great challenges that it brings to the EU in staying globally relevant must not be underestimated.

Right-wing populism (the type represented by Alternative für Deutschland, Front National and the likes) in some of Europe’s largest countries is often described as something entirely new, neglecting the fact that much of the criticism against the EU is deeply rooted within societies. The last decade of crises has simply given these movements a larger platform to campaign on. Euro-sceptic populism must be seen as a symptom of general mistrust towards a European Union that doesn’t manage to take all its citizens aboard, and that is not capable of telling the story of its own successes, even in countries which have always been the EU’s heartland like Germany, France or The Netherlands.

Eastern Europe as a great example

After many years of political disorder and “summit-politics” – where heads of state commute to Brussels more than to their home constituencies to sort out one crisis after the other – the vision for the European Union has become more blurry than it’s been for at least a decade.

Amidst all of this, a people to the east, in Ukraine, fights a de facto war that began over people’s wish for a better future – a European future. In Ukraine young and old took to the streets in 2014 to show their rulers that it was a European future, that they wished for. While prospects for membership of the European Union were long, the idea was nevertheless prominently anchored in the public discourse; and people chose to fight and some even died for the possibilities that the EU symbolised, refusing to return to what felt like a step back in history allying with a crude Russia.

This is a fascinating case of the normative powers of the Union. But we don’t even need to go beyond the EU’s formal borders in order to learn about how it still is a symbol of growth, inclusion and genuine happiness. The EU’s newest member states are all to the east of the former Iron Curtain that separated the east from the west. All of them, Poland, the Baltic countries or Romania knew the horrors of one political Union, and lobbied hard and intensive for their accession into another – one founded on democratic principles of freedom.

And while the EU has a better image in many of its eastern member states, there are other arguments for turning our focus here. Poland is already one of the largest member states in terms population or GDP, many lengths before countries such as Austria or Greece – and so it has been since its accession in 2004. But more importantly the eastern members of the EU have significantly stronger economic growth rates than their western counterparts, indicating that their economic importance to the EU will grow ever stronger.

While the appointment of the former polish PM Donald Tusk may be a great leap in acknowledging the importance of the EU’s eastern members (although one might argue the real value of being European Council president), the traditional core-states need to take further measures to assure that their eastern counterparts are an integral part of the EU and that their leaders have influence and responsibility.

For most of the second half of the 20th century the European Union was a symbol of peace and prosperity with one overarching goal: to make Europe a peaceful continent after hundreds of years of warmongering. Today various political crises have become so interconnected and dominant of the political agenda that a common European story is phenomenally absent. The people of the former Eastern Bloc know how a bad union can impact their lives, and consequently they see the immense benefits in their membership of this democratic, free and (relatively) prosperous alliance. For the EU to stay relevant in the 21st century, it must genuinely focus on all of its members - including the eastern ones – and look there for sparks of growth and new narratives.

Author's note: During the process of writing this article I had the pleasure of receiving extraordinarily capable comments and critique from fellow students, and I’d like to thank them greatly for their input.

Lukas A. Lausen is currently studying for an MPP at the Blavatnik School of Government and is President of the Danish Foreign Policy Society U35.
Democracy and politics Global cooperation