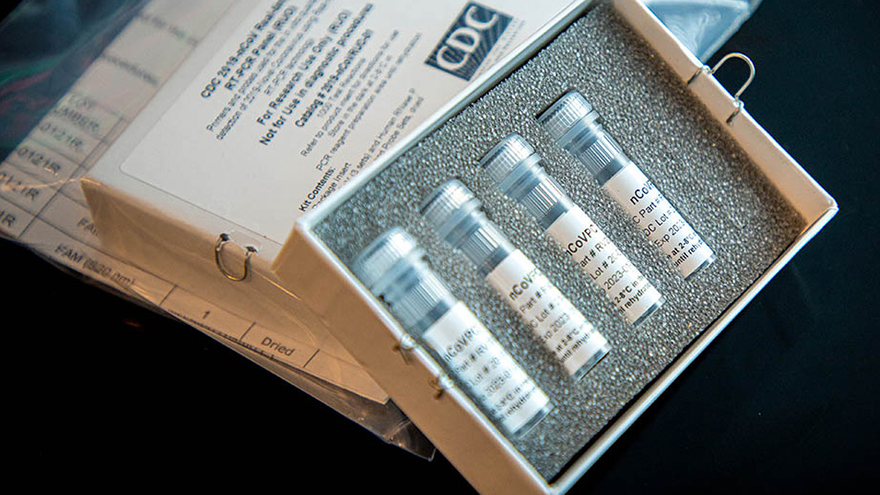 COVID-19 is currently spreading at an alarming rate. Despite showing signs of slowing down, the total number of infected individuals stands at around 13 million as of late July 2020, which is astounding compared to previous instances of the coronavirus, including SARS and MERS. In light of this, a strategy of mass testing, tracing and containing is paramount in keeping COVID-19 in check. Sample pooling is one such strategy to keep the virus at bay. Currently used for reverse transcription polymerase chain reaction (RT-PCR) tests (the test type used on nose and throat swab samples), its ability to pool together multiple samples has promising implications for the efficiency of future testing.

Sample pooling for RT-PCR entails five to ten genetic samples being grouped and tested together. Only if the test comes up positive will all samples need to be individually tested. As such, sample pooling can significantly increase testing efficiency and decrease costs for the RT-PCR test. It is particularly useful in the mass testing of at-risk individuals, including patients with chronic illnesses, the elderly (especially those in nursing homes) and frontline hospital staff. Sample pooling has seen multiple successes in replicable experiments. In Germany, a team of scientists have published research in The Lancet Infectious Diseases showing that if only one person in a group of thirty was infected, a positive result was still obtained from the pooled test. Reducing the number of required RT-PCR tests by a magnitude of 30 will massively increase efficiency and testing rates. Hence, sample pooling has the potential to revolutionise and greatly cut costs of COVID-19 testing.

The successes of sample pooling are not limited to the laboratory. Currently, sample pooling is being done in multiple countries, including China, Germany, India and Pakistan. It has been highly successful in Wuhan, where five to ten samples were pooled and tested together in a single test and an astonishing nine million people were tested in ten days. Sample pooling was also used to test residents and staff at 131 nursing and residential care homes in Saarland, Germany. 22,000 people were to be tested, presenting a large logistical challenge but also an opportunity to showcase the effectiveness of pooling. On the other side of the world, India and Pakistan have adopted sample pooling with high degrees of success.

Despite promising initial case studies, sample pooling is not without its problems. One such problem is the lack of sensitivity, with tests not being able to detect those with low viral loads. A second problem of sample pooling is cross-contamination. This can happen: a) during sample collection, when some residue genetic material contaminates another test kit; or b) during the laboratory test when many samples are tested at the same time. This is what happened in Canada, when traces of carryover from sample to sample in the RT-PCR machines led to false positives, while at the US Centers for Disease Control and Prevention, researchers entered and exited coronavirus laboratories without changing their coats, and even assembled ingredients in the same room where other researchers were working on positive coronavirus samples. Hence, sensitivity and cross-contamination are two problems that must be dealt with before sample pooling is deployed en masse.

There is an apparent mutual exclusivity of accuracy and efficiency. One possible solution to this dichotomy is the bacterial viral filter (BVF) produced by several companies in the United States. BVFs prevent cross-contamination by reducing the amount of bioburden (the number of bacteria living on a surface that has not been sterilised) by passing it through a filter, then putting it through a second filter to make sure any bacteria or virus is not detectable. This may be able to reduce the incidence of cross-contamination when collecting different swabs and samples.

Another possible solution to the aforementioned problems is the Enhanced RT-PCR (ERT-PCR) test kit. The ERT-PCR has much higher sensitivity than the conventional RT-PCR test due to an extra set of primers and an additional round of amplification. The increased sensitivity means that even patients with low viral loads, who are usually asymptomatic or pre-symptomatic, could be detected by this enhanced kit. In the context of sample pooling, the ERT-PCR could deal with the lower sensitivity and false negatives of the conventional RT-PCR, removing the trade-off between accuracy and efficiency. It remains to be seen whether the enhanced test kits live up to their potential, but the success of initial experiments suggests that we could be cautiously optimistic.

Selecting well-performing primers to create reactions with higher amplification efficiency is another possible solution to enhance test sensitivity. Meanwhile, the problem of cross-contamination could be addressed by simply using aerosol-resistant pipette tips and designated work areas and pipettes for pre- and post-amplification steps.

It is unlikely that an effective vaccine for Covid-19 will be developed anytime soon. Similar viruses, such as SARS or even the common flu, exist without a cure or with a vaccine that has to constantly evolve to face new strains of the virus. Additionally, the possibility of contracting Covid-19 multiple times has not yet been disproven. The most likely outcome ­– that we will have to learn to live with Covid-19, similar to how we currently live alongside the common flu – means that the strategy of trace, test and contain is all the more important in limiting its spread and potential victims. A vision where all citizens are tested periodically and positive cases successfully isolated, enabling everyone to go about their normal lives, is not a utopia – especially with the ever-improving technology of RT-PCR tests. There is still light at the end of the tunnel.

Ayo Chan (MPP 2012) is an alumnus of the Blavatnik School of Government.