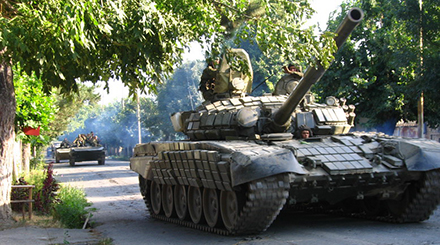 As the Ukraine crisis continues and Russia maintains its hard line in the territorial dispute ignited over Crimea, it is worth reviewing a paper written over five years ago by one of the Blavatnik School's academics.

BSG Professor Monica Duffy Toft has spent her academic career researching issues of international security, ethnic and religious violence, civil wars and demography. In 2008, she wrote a paper published in Foreign Policy in which she reflected on “Russia’s Recipe for Empire”.

Along with her “recipe” in which she outlined the three key ingredients of an empire, Toft made a prediction back in 2008. She identified Crimea in Ukraine and Transnistria in Moldova as just two of the many possible future Russian targets in Russia’s appetite for expansion. And it came with a warning: “[B]uilding an empire is an expensive undertaking. Russia’s appetite for expansion might only weaken it further. Ukraine, for instance, is deeply divided between Russian sympathizers and chauvinistic Ukrainians. Applying the recipe there would be far more costly than it was in Georgia. The Kremlin would be well advised to take empire off the menu.”

You will have to read Toft's full article to find out more about how to “cook up” an empire with three simple ingredients. I recommend that you do - there may be some lessons in there that we should all note.