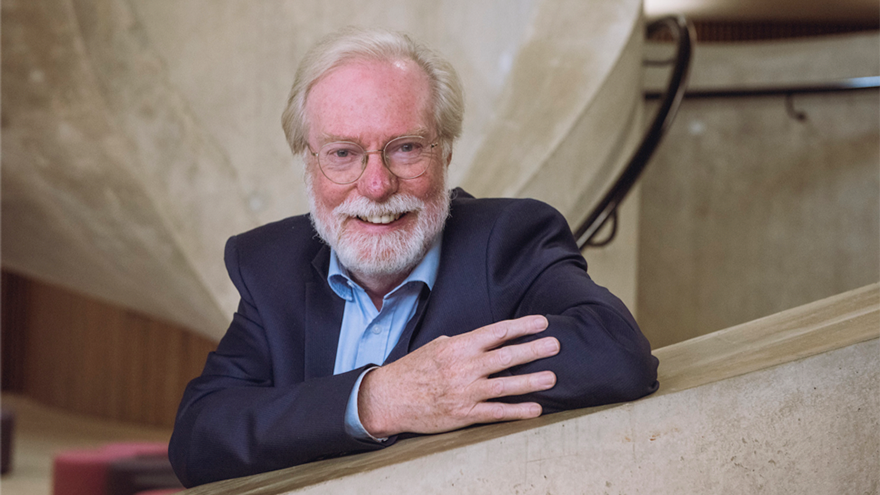 Professor Sir Paul Collier is Professor of Economics and Public Policy at the Blavatnik School of Government. Awarded a knighthood in 2014 'for services to promoting research and policy change in Africa', his expertise covers areas including conflict and fragility, democracy and development in low-income and natural resource-rich societies, and urbanisation in low-income countries. In 2008 Professor Collier was awarded a CBE ‘for services to scholarship and development’. From 1998–2003 he has served as the Director of the Research Development Department of the World Bank. He has authored numerous books, including Greed is Dead: Politics After Individualism (with John Kay, Penguin, 2020), The Future of Capitalism: Facing the New Anxieties (Penguin Books, 2018), and The Bottom Billion (Oxford University Press, 2007).

As an MPP student at the Blavatnik School of Government, I was privileged to study in his economic development class, and I was delighted when, a few weeks ago, he accepted my request for a Zoom interview. His insights are necessary to understand the economic and political devastation triggered by the pandemic, and how we can build back better.

In your book Greed is Dead you discuss the notion of individualism and the ‘Economic Man’, and how we are witnessing peak greed at the expense of our sinking morality. How do you envision our journey to rebuild communities and social cohesion, especially in the midst of the global pandemic?

The pandemic has worked both ways. The most successful countries to contain COVID-19 have been Denmark, Norway and New Zealand. These countries all have leaders who are modest, good communicators, and who have won the trust of the population. They communicated the new common purpose to contain COVID-19 and a straightforward strategy to achieve this purpose, in which we all have obligations. When talking about COVID, the Prime Minister of New Zealand always says that “we are a team of 5 million.” We all are a team with responsibilities and obligations, so everyone is morally load-bearing. America, on the other hand, is bitterly divided. It is impossible to forge a common purpose on anything – everything becomes an existential source of disagreement. In countries like Denmark and Norway, it’s not a choice between saving people’s lives at the expense of the economy because they expect everybody to behave responsibly and people are able to get on with their lives.

Amid global economic lockdowns, UK foreign aid spending was cut by £2.9 billion. With over 2 million confirmed COVID-19 cases across Africa, the World Bank predicts that economic growth in Sub-Saharan Africa will fall to -3.3 percent in 2020, pushing the region into its first recession in 25 years. What do you envision for post-pandemic Africa? What are the key policies needed for African entrepreneurs, micro-, small and medium-sized enterprises, and corporations to survive and thrive?

Africa actually handled COVID pretty well owing to their experience with Ebola in West Africa and HIV in Southern Africa. They took the disease seriously so it was relatively easy to persuade people that they needed to change their behaviour. However, the lesson from the shutdowns in Africa is that shutdowns work very briefly. You need some sort of brief signal to people that this is serious but after that you need something like the Danish strategy to take responsibility for your own life, protect yourself and protect others. Prolonged lockdowns are a route to poverty.

Two thirds of Africa’s human capital work either solo or in micro-enterprises. These have no scale and no specialisation, so are doomed to have low productivity. There is already a real shortage of small venture capital investment, ie spotting a firm of 20 people that, with some capital, could grow to 100 people. That’s the sort of financial industry that these countries need, but African governments do not have capacity to spend 10% of their GDP helping firms. But the firms are not just providing jobs – they are the engine of growth for the whole economy. If you destroy the firms, you destroy the engine of growth.

The best we can do is use development finance institutions; the World Bank has the largest such institution, which is the International Finance Corporation, and Europe has a big one in the European Bank of Reconstruction and Development in North Africa. Altogether there are about 40 global finance institutions in the world, but they are not very good at working together. The Blavatnik School convened them in February to talk for two days about what they could do better. Ours is really the only venue where they come together. What’s needed is to pool their information to provide a systematic analysis of where financial support is needed.

Prime Minister Justin Trudeau pleaded the case to the global community that developing countries must not be left behind in the pandemic recovery. What do you envision a just response will look like from rich countries, the International Monetary Fund (IMF) and the World Bank? Building on the IMF’s expanded provision of debt service relief in response to COVID-19, how can we secure further economic stimulus packages that particularly support women and girls?

I wrote an article in the Financial Times recently about how we need to do much more to compensate for this microeconomic hit. There are substantial tensions in the world at the moment. There are rivalries between America and China, and China has built up very large opaque debts in Africa. At the moment, the Chinese government is trying to argue that they are commercial debts so they don’t fall under any G20 agreement to defer its service and that's completely unreasonable. Europe and North America are not going to agree to provide money to African governments if African governments just use that money to service their debts to China. That’s really the key international public policy issue for Africa at the moment – its parity treatments of all these debts and transparency in what the debts are.

I think the best way of dealing with [economic stimulus, particularly for women and girls] is often using mobile phones to find out very rapidly which localities in a country are hardest hit – if there’s a population of people who are unable to make their usual payments on their mobile phones, then you can use mobile phone systems to make rapid transfer payments. That’s the technique that I would like to see used not just by African governments but by international relief agencies. These agencies are very traditional – they have huge bureaucracies and they spend a lot on administering money, whereas you could do all this at very low cost if you use modern technologies.

In your book The Future of Capitalism: Facing the New Anxieties you discussed the importance of building an ethical world, namely through the formation and revitalisation of international organisations to ensure renewed commitments to collaboration and development. How can we build trust between nations to safeguard international cooperation in our fight against COVID-19?

Even within Europe we do not yet have any agreement on how to help the countries that are hardest hit. I come back to the IMF and the World Bank as crucial organisations. I think that both the managing director and the board can say this is a macro-emergency. On this issue you should be able to get American and European cooperation and that's enough to be a decisive majority on the board.

I was moved by your personal story, outlined in The Future of Capitalism, and the parallels you drew between your life and your cousin’s. Her dreams were cut short due to the early death of her father and her teenage motherhood, whereas your scholarship at Oxford led you to being awarded a CBE and knighthood for your years of service to alleviate global poverty. How can we close the class divide between ‘the prospering educated and the despairing less educated’ you describe?

There is a lot we haven’t done that we can do. Places other than booming metropoles need to be revived. London is about 75% higher productivity than Wales, which is why in Wales every single region voted for Brexit. If you look at the map of Trump votes in America, it’s the neglected places in the middle that vote for Trump. Spatial distribution of productive opportunities is not a matter of transferring social benefits, it's about the capacity to be productive. People living in places that they want to live should have the capacity to contribute to those places. And that means being sufficiently productive to earn a decent living.

Syed Shoaib Hasan Rizvi (MPP 2018) is an alumnus of the Blavatnik School of Government, University of Oxford. He is the founder of I Am An Entrepreneur, a not-for-profit organisation that provides skills training, microloans and mentorship to women in Pakistan who have the passion to start their own ventures but lack resources.