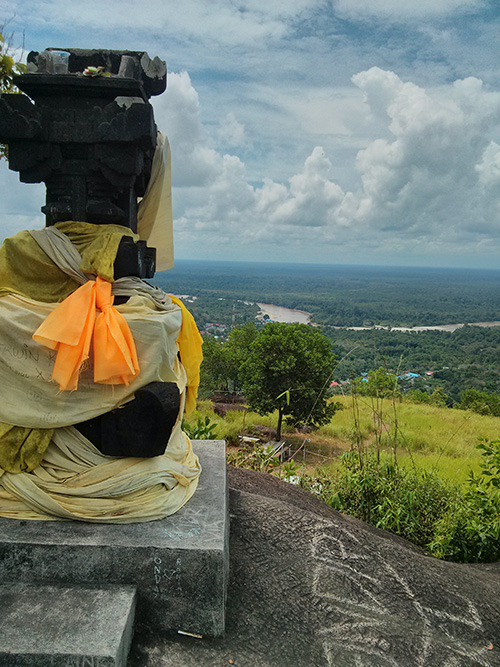 "There are only two seasons in Palangkaraya," I was told, "raining and not raining." Currently, we're experiencing the 'not raining' season: hot during the day, less hot during the evening and humid all the time.

[caption id="attachment_7401" align="aligncenter" width="500"] A kaharingan shrine at the very top of Tangkiling hill, Palangkaraya. The kaharingan faith is professed by the Dayak of Kalimantan.[/caption]

Built on the peatlands of the Sebangau National Park, Palangkaraya was once envisioned as the nation's capital. Some symbols remain from that '50s dream -- a roundabout with 8 roads leading away (each representing Indonesia's major islands), a few statues and a bridge. But otherwise, the city has settled into its identity as a provincial capital ("the shopping is better in Banjarmasin", says a knowledgeable source). Parts of the city are still officially categorised as forest. There are few high rises marring the landscape; houses mostly have one or two floors at the most and retain traditional motifs. Every street is overflowing with lush vegetation.

When you go to Yos Sudarso Street, one of the biggest streets in the city, you'll see staid government buildings. But by night, the street is transformed. Cafes set up their tents, pirated DVD sellers ply their wares (which always gives me a pang of homesickness), and on some days, a mini fair springs up. All this is blatantly illegal. Every morning, the owners of these establishments are fined, so they take down their tents and by 5 pm that day they're all back up. Only bad businessmen treat a fine as a deterrent; everyone else sees it as a business expense.

There are signs of decay here: there are no regular garbage collection operations in some residential areas. Where I live, most choose to burn their waste; on Fridays the evening air is thick with the smoke of burning paper and plastic. The storm drains have now become stagnant ponds, each with its own well-developed ecosystem.

But the really strange thing about Palangkaraya is that there are no pedestrians. I do not mean "fewer than Oxford" or "just 10 or 20". I mean there are none. I didn't notice it on my first day there, when I was on my exploratory amble. I felt the eyes of every passing motorist on me, but I'm an Indian woman so I'm used to that. Later it struck me: me with me large bag of groceries was a terribly incongruous sight in this city. Now I keep my eyes peeled, and so far I have seen exactly one pedestrian (excluding that time I caught sight of myself in a mirror). Sometimes I spot a person on the street and gasp with joy... till they unlock their car and get in. Every single person I have met so far has a motorbike or car; they drive everywhere -- from work to the laundry down the road. When I tell a colleague or a government official that I met 10 minutes ago, " Oh I'll walk, it's just 20 minutes" they gasp and tut and offer to drive me. It is understandable of course. A 10 minute stroll will melt you into a puddle of sweat. Even so, India has similar weather and there are still people on the streets. Oh don't get me wrong -- The Ladies Who Lunch in South Delhi will take their Mercs to a restaurant that is 50 metres away. But there are others who can't afford a car or bike and walk to the market or to the bus stop. Where are these people in Palangkaraya?

I did not realise what a city without public transport meant. "I'll walk everywhere!" I thought. But then, the neighbourhood stores don't sell green groceries so you have to walk to the supermarket that is 20 minutes away. The footpaths in the suburbs are now overgrown with tall weeds. As night falls, the alleyways become less safe to walk in-- no streetlights. It's not the crime I'm worried about, I'm told that Palangkaraya is a very safe city. As you're creeping along in the dark, you hear rustling in the bushes that seems to get closer and closer to you. It's not small insect rustling, it's king-cobra-escaped-from-research-facility rustling. It's probably a cat, but that's the sort of prosaic thinking that gets you killed in a horror movie.

[caption id="attachment_7402" align="alignnone" width="800"] A view of the forests of Central Kalimantan and the Kahayan river as seen from Tangkiling hill, Palangkaraya[/caption]

I asked a friend if Palangkarayans ever walked and she took me to Tangkiling Hill on a fine Saturday morning. After a hour long walk that was more of an uphill scramble over mossy, slippery rocks, we were at the top. With an iced tea in hand, I looked down upon the Borneo's incredible forests, the lung of the world. "You can't drive up here" my friend commented, somewhat ruefully, "But worth the walk!". I took pictures of course, but no camera can ever capture the feeling of looking down on this vast, vast forest that stretched out in every direction and beyond the horizon. At the point where it touched the horizon, it seemed to merge into the mist. "I sure hope the BSG summer project contest judges don't discriminate against those who don't have those fancy Truswellian cameras," I remarked to no one.

By day 7, my heart sank every time I had to make a trip longer than 35 meters. It feels like I have passed a Palangkarayan test. On to the next.

Srilekha Sridhar is an MPP student from the class of 2013. She undertook her summer project in Palangkaraya, Indonesia with WWF.
Economy The School