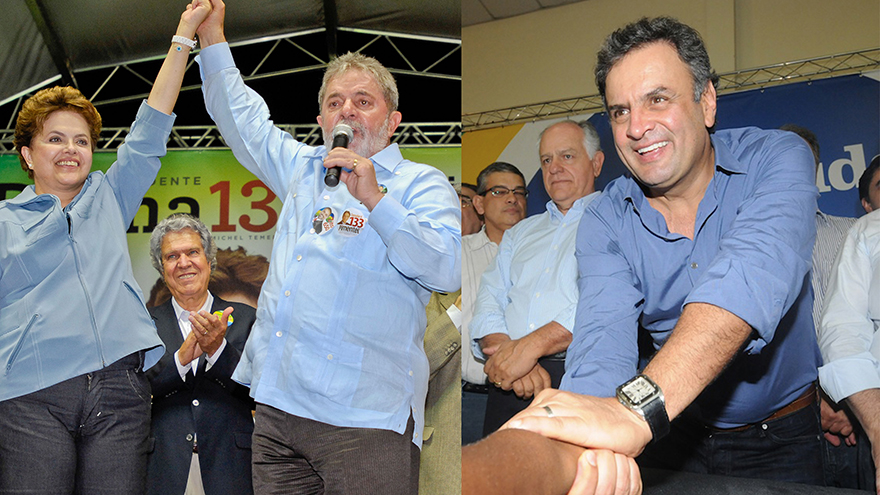 Against a backdrop of high polarization and economic recession, Brazil’s presidential election represents a maturity test for voters and presidential contenders alike.

In a country that has been dubbed “the social media capital of the universe,” social networks play an increasingly crucial role in electoral campaigns. But for some Brazilian users, sites like Twitter, Facebook, and Tumblr have become real battlegrounds where ‘winning’ the political argument trumps respect and personal ties. In 2010, law student Mayara Petruso shocked Brazil with tweets calling on Brazilians to kill the people of the poverty-stricken Northeast, whom she blamed for the election of leftist President Dilma Rousseff, from the Workers’ Party (PT). Since then, political hate speech has both grown and diffused into personalized attacks. According to internet rights NGO Safernet, the number of reported internet hate speech cases more than tripled in the months preceding the elections, relative to the same period in 2013.

High levels of class or geographical voter polarization are not in themselves a new problem in Brazilian politics – it is a recurring feature, and often goes beyond the simple rich-poor dichotomy. Not this time. The ongoing elections represent the collision of two Brazils living in completely distinct economic realities. The upper and middle classes have lost purchasing power due to the combined effects of economic recession, high inflation, and a hefty tax burden, whereas government spending on social programmes and pro-poor credit lines have ensured steady or even growing income and consumption levels for the lower classes.

But is Brazil so neatly divided between rich and poor? Both left and right, that is what the presidential contenders would like voters to believe. President Rousseff of the Workers’ Party (PT) and pro-business Social Democratic Party (PSDB) candidate Aecio Neves chose campaigning strategies targeted at their specific constituencies, rather than offer a far-reaching proposal to bridge the ideological gap. President Rousseff is all about her social track record; Aecio is all about macroeconomic reform. This may be enough to draw enough undecided voters to secure victory, but it contributes directly to dumb down political discourse and accentuating partisan division. High inflation still hits the poor harder than the rich in Brazil – to the point of threatening gains in consumption power achieved via PT’s social programmes – but in a country gripped by a polarizing right-left discourse, there is little room for sound economic considerations on either side.

A vibrant, polarized electorate is a positive sign for Brazil’s relatively young post-1988 democracy. But when polarization rises based on artificial political discourse rather than facts, democracy shows its ugly side. Mayara Petruso’s hateful tweets were shocking in 2010. Four years later, in a disturbing twist, they have become common place in the Brazilian social media scene. The Esses Nordestinos… Tumblr account assembles hundreds of offensive messages against Northeasterners for their alleged support of President Dilma Rousseff out of sheer ignorance or in order to benefit from the Bolsa Familia cash transfer programme. On the opposite end, the Esses Paulistas… Tumblr, assembles social media attacks against Brazil’s more well-to-do southern population with similarly offensive language. Not many Brazilians take an active part in this virtual fratricidal squabble, and those who do seem to ignore that election data do not support the Rich-South vs. Poor-Northeast antagonism. President Rousseff scored victories in key Southern and Southeastern states. But even if somewhat artificial, partisan politics and appellative propaganda have created a political animosity that is real and could cause much damage to Brazil’s social fabric before a new President is sworn in.

It would be naïve to expect an election of such high stakes not to be ugly. The late surge of Aecio Neves (33.5%) in the first round of voting against President Rousseff precarious lead (41.5%) means that it is the first time since 2002 that the Social Democratic Party has fielded a candidate with real prospects of wresting the presidency from the Workers’ Party. The result will largely depend on which side the votes (21.3%) of third-place candidate Marina Silva will fall, but contradictory pre-polling surveys have been no help in predicting a clear outcome. An atmosphere of ‘anything could happen’ has turned up tensions sky-high as both candidates and voters brace themselves for the run-off.

This is how things look from the top: it is PSDB’s golden chance to come back to the limelight after years of poor electoral showing and sheer inability to mount an organized parliamentary opposition. For PT, it is the ultimate test of the electoral resiliency of the party machine. For Rousseff, in particular, it is the chance to prove that she has risen above Lula’s patronage to establish a legacy of her own.

This is how things look from the bottom: Brazilian voters are bracing themselves for the prospect of a PSDB victory that would effectively mark the end of an era that began with Luis Inacio Lula da Silva’s election in 2002, and saw Brazil go through a boom of double-digit GDP growth rates. Lula and Dilma Rousseff will leave a mixed legacy: with a 51% rejection rate, President Rousseff is criticized for mishandling an economy that went from boom to recession, but she has a real claim to lifting millions of Brazilians out of poverty through cash transfer and other social programmes. This new lower middle class will not see their benefactor put out of power lightly.

The election result is up in the air, but it is safe to say that the winner will be voted into office by little more than half of Brazil’s 143 million voters. In a mature society, the first order of business for politicians and voters alike would be accommodating the aspirations of and reaching out to the losing side. Neither presidential candidates nor radicalized voters seem interested in what happens after the run-off results come through, but amid high voter polarization, a national compromise is the sine qua non of governability. Political humility may not conquer the hearts of all Brazilians, but it will go a long way in ensuring their respect.

Vinicius G. Lindoso is an MPP student at the Blavatnik School of Government.
Democracy and politics Global cooperation