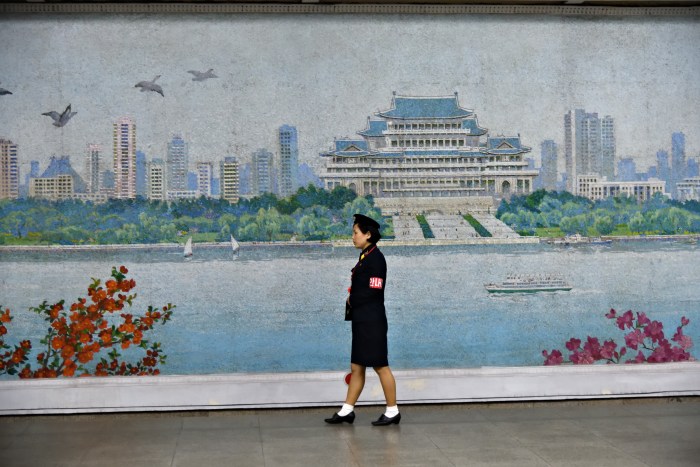 After finishing her homework and house chores and saying goodnight to her parents, Ha-Young would plug her earbuds into her tablet, and watch the latest Korean drama series underneath her blanket. Upon finishing the series, she would take the USB stick to school and quietly ask her trusted friends if anyone wanted to swap memory sticks that had different movies and drama series on them. One time, she paid a lady in the market stalls to get a curly perm to imitate one of the actresses in the drama episode she last watched.  She even bought a glittery hairband to finish the look.

Ha-Young was born in 1989 in Hoeryoung,
North Korea, and described her childhood at length to me a few summers ago at a
café in Seoul. She had escaped her country, and became a citizen of South Korea
in 2011. As she and her friends described their past times to me, I was struck by
how different their descriptions of their lives were from the depictions of
North Korea in mainstream Western media – much of which pertain to the
political elite and military.

Ha-Young is part of what is often referred
to as the Jangmadang generation. Jangmadang in Korean means ‘market
grounds’, and refers to the black and grey markets that sprang up around the
time of the Great Famine, a period in the mid-1990s when the North Korean
economy collapsed and resulted in the deaths of an estimated 800,000–2 million
North Koreans. North Koreans who were born in the middle of, or after, the
famine grew up dependent on these markets. That is, almost all defectors who
are 35 years old or younger – an age group that comprises about a quarter of
the country’s population – bought their foods and goods by shopping in the
informal markets. They did not stand in lines with ration tickets at public
distribution centres like their parents or grandparents had.

There are a few broad characteristics that
describe this young generation. First, they are capitalistic, individualistic,
and more likely to take risks to support themselves and their families. No
longer are they blindly dependent on and trusting of the Kim regime. Second,
North Korea’s young adults have unprecedented access to foreign information –
information that is incrementally unravelling what they have learned in school
and through their political youth leagues. Third, this younger generation is
significantly less loyal to the state and its leadership. Much of their
experiences with markets and access to foreign information contradict the
propaganda they learn from the state, so millennials dismiss much of what they
hear via the state radio, television and newspapers.

This decrease in devotion to the state
presents a clear challenge to the authoritarian government: either adapt their
narrative and policies to meaningfully capture the younger citizens’ loyalty,
or continue to lose credibility and support among the millennials, whose
influence over time will naturally eclipse that of the older generations. If it
does not adapt, Kim’s government risks experiencing dramatic changes that it
may not be able to control.

Now, we must remember that North Korea
remains the most authoritarian state today, systematically inflicting egregious
human rights violations onto its citizenry of 25 million. The Songbun
system (political caste system) pretty much determines the fate of every baby
based on the role that the baby’s ancestors played at the inception of the
North Korean state. A nationwide network of brutal political prison camps and
detention centres exists to ensure that every person lives in lockstep with the
demands of their state, and lives up to the wishes of the Great Leader, Kim
Jong-Un. With surveillance technologies purchased from China and elsewhere, the
regime’s surveillance system, which used to be implemented offline by brute
human force, is now becoming systematically digitalised. The Chinese–North
Korean border is no longer only guarded by dogs, electric fences, and border
guards under shoot-to-kill orders against anyone suspected of escaping the
country. These old-school methods of preventing defections have been reinforced
by tens of thousands of CCTVs, facial recognition software and motion sensors.
North Korea remains as brutal as ever.

What enables this regime to remain so
effective in controlling its people as a sealed-off country is, in part, its
hold over the monopoly over information access and dissemination. Radios are
manufactured to be tuned only to the state’s stations. All media electronics
(televisions, radios, DVD players, computers) must be registered with local
authorities and are subject to random content checks. All mobile phone activity
is subject to monitoring by the state. International calls are illegal. One of the
most heinous ‘crimes’ that a North Korean can commit is to consume foreign
media that is not sanctioned by the state – an act punishable by hard labour,
imprisonment and/or execution.

Despite these draconian measures, a quiet information revolution is
taking place inside North Korea. Over the past three decades, small-scale information access activities implemented
by networks of disparate defector groups and commissioned middlemen have
cultivated interest in foreign media among swaths of North Koreans. Human
rights organisations, tech companies, and the US State Department have
separately funded such creative efforts to push information into this country,
despite the risks and dangers that exist. Between second-hand Chinese radios and DIY
construction, many ordinary North Koreans use black-market radios to secretly
listen to foreign programmes such as Voice of America, Radio Free Asia, Free
North Korea Radio, and Radio Free Chosun. Just like Ha-Young
did when she was a teenager, more and more North Koreans clamour for DVD and CD players, cell
phones, e-books, movies, news articles, and simple computers that are illegally
snuck in by defectors and NGOs.

Why do North Koreans risk their lives to
seek forbidden information and media? The insatiable yearning to learn new things
– to discover our world, to see how other people live, what they eat, how they
spend their days – is a universal hunger that cannot be squelched, even by the
Kim regime.

As important as extant campaigns are, these
spotty and small-scale efforts are not a sufficient force against such a
ruthless regime. These information activities must be reinforced by a much more
powerful engine with coordinated strategies, expertise, innovative technology,
and more funding by foreign entities, such as the US government and its allies.
The North Korean government must change and adapt to the times, and by marshalling human capital,
information networks and North Korean defectors, increasingly informed younger generations of North
Koreans can create irreversible cracks in the regime, a society
previously beyond reach, and ultimately create conditions that favour freedom, human
rights, and dignity.

In the words of Ha-Young: “People say
mountains change in about ten years. If something as stubborn and mammoth as a
mountain can change in a decade, the hearts of ordinary North Koreans can
change. I’m sure of it”.

Jieun Baek is the author of North Korea’s Hidden Revolution: How the Information Underground is Transforming a Closed Society. She is currently studying for a DPhil in Public Policy at the Blavatnik School of Government.