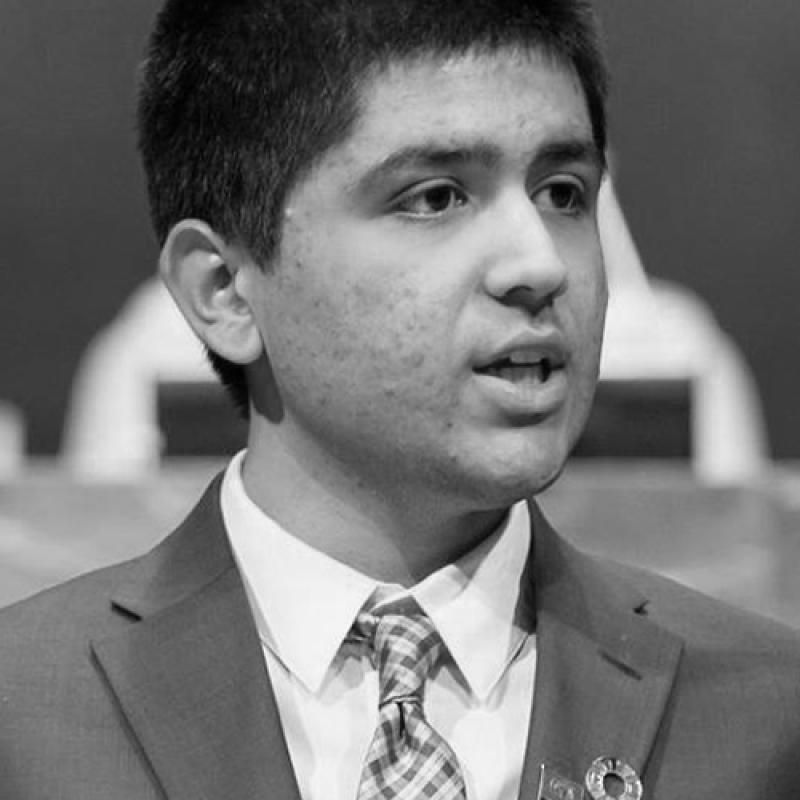 Insightful interview with Hina Jilani whose credits include being a former Advocate of the Supreme Court of Pakistan and the first Special Representative of the UN Secretary-General on Human Rights Defenders. 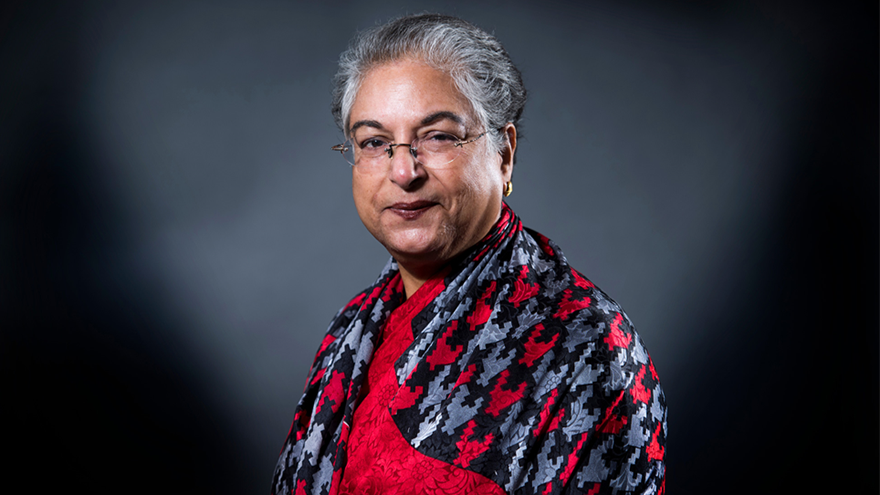 Advocate Hina Jilani is a pioneering lawyer who has dedicated her career to fighting for the vulnerable, minorities and political prisoners. She established the first all-women’s law firm (1981) and first legal aid centre in Pakistan (1986) and was awarded the Millennium Peace Prize for Women in 2001 for her work promoting women’s rights, human rights and peace in Pakistan. In 2013, she joined The Elders, a group of independent leaders mandated by Nelson Mandela’s vision to amplify the voice of the voiceless. A former Advocate of the Supreme Court of Pakistan and the first Special Representative of the UN Secretary-General on Human Rights Defenders, Advocate Jilani now serves as Co-Chair of the international Task Force on Justice. In this interview, she discusses COVID-19 and the rise in gender-based violence, and shares insights on her her work promoting peace and security for the people.

Justice is a fundamental human right, yet today 5.1 billion people do not have access to justice. You have dedicated your life to the fight for justice for women, people living in poverty, and minority groups not afforded legal aid. What are the biggest impediments in this work?


There is a lack of political will amongst many governments to address structural inequalities. If these were being addressed, we would have seen a movement to build institutions facilitated by grassroots justice workers who can help people in their local communities gain access to justice.


Let us also remember that when we talk about structural inequalities, it is not just legal justice we are seeking – we are seeking social justice in every form. For example, Pakistan’s constitution establishes many civil and political rights as fundamental rights, yet many economic, social and cultural rights are not protected as fundamental rights and freedoms – they only figure as principles of policy and are only obligatory on the state if the state has the resources to uphold them. Unfortunately, systems generally refuse to prioritise the allocation of resources. Conflict arises when communities are not at peace and communities cannot be at peace the way that inequality reigns today.


Your open letter to world leaders argues that human safety, security and sustainable development relies on countries working together multilaterally. How can we strengthen global commitment to the UN's founding charter and challenge narratives that disparage multilateralism?


In contrast to the criticism the UN receives from many quarters, we must consider the successes that have been brought about because it was able to gain consensus from member states on significant matters relating to peace and security, social and economic rights, alleviation of poverty and so on. We must, however, continue to improve the UN system.


Unfortunately, in recent years, certain world leaders have denigrated multilateralism and have in many ways exalted their positions on going it alone to an extent where they have influenced the mindsets of their population. Nobody goes it alone in this globalised world and many major endeavours and initiatives have only been achieved thanks to multilateral cooperation.


The global community has witnessed the UN's fact-finding missions and reports come under attack by populist authoritarian regimes. Drawing on your eight years of service as the first Special Representative of the United Nations Secretary-General on Human Rights Defenders, what do you think is the root cause of this and how can the UN respond?


Those leaders who ignore or deliberately perpetrate human rights violations on their own people are afraid of an international system enabling citizens to voice their concerns. In their own countries, leaders have control and can – if they so desire – block relief from reaching the people whose rights are being violated. The international system enables people to seek support from outside their countries.


People like myself who conduct these fact-finding missions do so with the resolution to honestly state what we find regardless of what the countries and UN member states think about our findings and conclusions. It is a responsibility of the UN’s multilateral system to gather a network of independent experts with the skills to carry out these investigations and with the integrity, honesty and courage to state what they find. We are never diplomatic in what we say – our only concern is that we communicate our findings in a constructive manner that enables people to build consensus on the recommendations we make.


The world is witnessing a shadow pandemic wherein lockdowns have increased women’s and girls’ vulnerabilities to domestic and sexual violence. Survivors are trapped with their abusers, with limited access to centres and shelters. What can be done to economically empower survivors of gender-based violence, and how can civil society protect women and girls during this critical time?


In many societies, women’s movement is culturally and socially restricted and their opportunities and freedom of choice are therefore limited. It becomes a cycle of oppression that makes it difficult for women to take opportunities when they become available.


The COVID-19 pandemic has revealed that systems for the protection of women do not work. I run a shelter [Datskak] in Lahore, where the pandemic caused so much panic that all other shelters closed down. We kept Datskak open despite the challenges because we couldn’t close our doors to women who would be desperately looking for shelter and refuge from violence.


It is not only income and economic self-sufficiency that keep women in a cycle of violence. From my 40 years of experience, I have learnt that professional and high-earning women are as vulnerable to violence as women who do not have economic independence, and their choices can be just as limited. We need to empower women by giving them confidence in their ability to not just be present in the public domain but to be at the top in public service. In Pakistan, as women’s presence in parliaments has increased, women have asserted their presence by making significant legislative contributions. Bringing women to the table as leaders also brings their voices to the table, allowing women to raise their own issues as political and national issues rather than issues pertinent to women alone.


In the Samia Sarwar case, a woman who wanted a divorce from her abusive husband came to your women's shelter for refuge. Her life was cut short in the name of ‘honour killing’, and you narrowly escaped death by gunfire at your office. Pakistani rights activists estimate that there are about 1,000 honour killings in Pakistan each year. What would you identify as our greatest obstacle in putting an end to this?


The Samia Sarwar Case was not the first case of honour killing that was connected to my shelter but it was the seminal case because it happened in the lawyer’s office and there was public outrage. At first there was a lot of resistance but gradually the women’s movement and the women’s rights lobby brought public opinion to agreement that this was unacceptable. Legislation was made and we now have a fairly good law on honour killings.


The biggest impediment to eliminating this practice is therefore not the lack of legislation – in many countries the legislation does exist – but failure of governments to have a strong social policy to back the law. Our law enforcement system lacks the sensitivity to apply the law in a manner that protects women. If governments and state institutions are cautious to put pressure on those social classes that indulge in this crime only because there is political benefit to be had then we are not going to get rid of the practice.  The women’s lobby raised this issue and has brought public opinion to a level where people find this practice abhorrent. In the past, our superior courts in many ways condoned honour killings; now, whether you are a judge, politician, religious leader, community leader, columnist or journalist, you cannot venerate honour killings in Pakistan.


Your sister, Asma Jahangir, shared your commitment to democracy, opposing military dictatorship and speaking truth to power. Pakistan and the world lost a great human rights advocate upon your sister’s passing. How do you think Asma inspired a generation of women leaders in Pakistan? What structural reforms are necessary to facilitate women running for office in Pakistan?


As for enabling more women to run for office in Pakistan, it is the women themselves who are developing the ecosystem in which this is possible. Governments and state institutions may mention bringing women into the mainstream but that is not their priority. I believe that the women’s rights movement is one phenomenon upon which we can depend. We must support its sustainability by bringing in women and men of all ages to ensure there is no generational gap in carrying the movement forward.


What is the one piece of advice you would give to youth today to continue advancing peace and human rights?


Working for human rights, peace, equality and dignity of the person is not easy work in many societies. One has to be aware that success is not going to be easily come by or quickly achieved. I have learnt to never be disheartened by prolonged struggles. I have learnt to be consistent and resilient in my demands for what I feel will strengthen human rights and fundamental freedoms.


My advice would be this: never become cynical or frustrated. There is no place for cynicism in the life of a human rights defender. We are optimists; we remain optimists. Secondly, never give up the tendency to be outraged. It is our outrage at injustice, at inequality, at inaction of governments and state institutions that gives us the energy to fight for our rights and the rights of others. If you see inequality and injustice around you, you have to do something about it. You may not be able to do something alone so you have to instil in yourself the sense and ability to associate with others. Speaking of Asma earlier, I think one of her greatest strengths was her ability to bring people in to join her causes and fights against injustice.


Syed Shoaib Hasan Rizvi (MPP 2018) is an alumnus of the Blavatnik School of Government, University of Oxford. He is the founder of I Am An Entrepreneur, a not-for-profit organisation that provides skills training, microloans and mentorship to women in Pakistan who have the passion to start their own ventures but lack resources.