No return for Kurdistan’s independence now 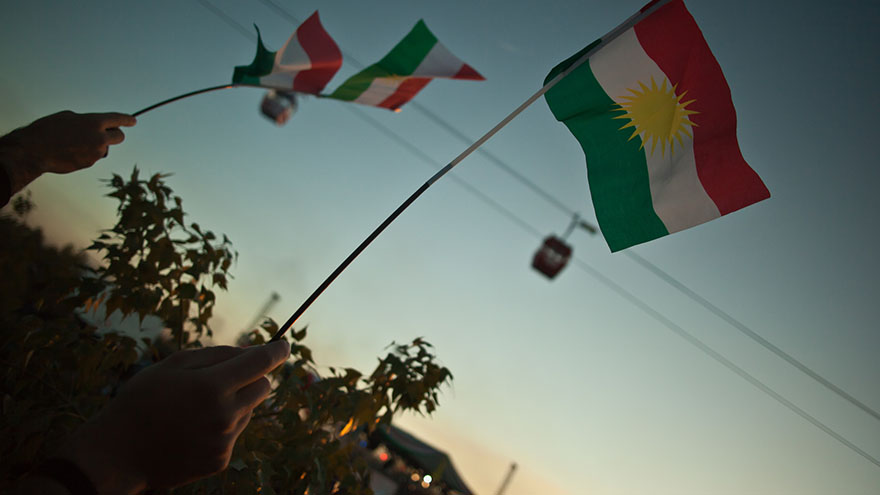 For the first time ever, the Iraqi Kurds have seriously raised the flag of independence and recently made several critical steps forwards for this purpose. The process has been rolled out with no chances of return. The date for the independence referendum has been set: September 25, 2017.

Although going independent has been long emphasised by President Masoud Barzani, this is the first-time Iraqi Kurds go formal and full-force on this subject. Calls for independence were especially strong in 2014, when ISIS had taken large swaths of territory in north and central Iraq, disrupting ground borders between Kurdistan and Iraq, and just months after Baghdad’s suspension of all its financial obligations vis-a-vis Kurdistan Region. “The time is here for the people of Kurdistan to determine their future,” claimed President Barzani in an interview with CNN’s Christiane Amanpour on June 23rd 2014. Only forty days thereafter, ISIS turned against Kurds, attacking Peshmerga frontlines which made the Kurds to put that quest on hold and make the defeat of ISIS their priority. In fact, many saw the turn of ISIS against the Kurds as a sabotage of independence by the Baathists elements within ISIS and their regional supporters, a view shared by President Barzani. Later plans in May 2015 were also derailed by internal disputes. However, today as the end of ISIS in Iraq is militarily approaching, the Kurds see the opportunity very ripe to go for the long-held, popularly widespread aspiration.

During the First World War, the French and Brits – with endorsement from Russia – shaped new boundaries for the Ottoman’s empire heritage of the Middle East, that was named Sykes-Picot Agreement. That treaty deprived the homogenous Kurdish areas from any statehood and the borders were drawn to divide them and appease other nations. Iraq never became a welcoming nation-state for the Kurds. The succeeding regimes in Iraq carried out a carefully planned ethnic assimilation and Arabisation plan by killing hundreds of thousands of Kurdish civilians, tarnishing 4500 villages, forced mass depopulation, and denial of basic rights. In fact, today many in Kurdistan feel offended when you address them as Iraqis.

When the United States toppled Saddam’s regime in 2003, the Kurdish leadership agreed and contributed to the new chapter of Iraq on the condition that it becomes a federal, pluralistic state where the Kurds feel partners and not subordinates. Yet, this did not happen and soon leaders in Baghdad followed a centralist policy which practiced majority-minority politics, of which the Kurds will always lose. Federalism was never born, disputed territories never settled, and thus the trust of the Kurds in Baghdad faded away.

Despite current first-time-ever military cooperation between Erbil and Baghdad, Kurdish leaders view the incumbent Iraqi prime minister Haider Abadi as the same as those followed since 2003. These days, the commonalities between the Kurdistan Region and Baghdad, with the exception of ISIS (only in terms of military cooperation), is none; to the extent that commodities are tariffed when they pass over from the Kurdistan region to the rest of Iraq.

In addition to the miserable marriage with Iraq, the Kurds view the developments in the Middle East since 2011 as a good opportunity for declaring their statehood. A century after the Sykes-Picot, the Iraqi Kurds feel confidently ready to build on the opportunity of the turmoil in Middle East. Those wars and civil wars present themselves as a chance where the Kurds can declare their independence, since states are usually born out of conflicts. They also understand the associated risks and challenges of taking steps towards full independence and have reiterated commitment to any outcome, but they better understand that opportunities are also prone to be lost.

Yet the Kurdish leadership insists on an “amicable separation” with Baghdad, achieved through peace and negotiations. This, however hopeful it seems, might be easier said than done as Baghdad has more to lose, particularly in those areas disputed by Erbil and Baghdad which are now under the Kurdish control. However, the Kurds have emphasised that they will not abandon those areas and that the fate of those areas is to be determined by a referendum to officially join the region and that they as well will participate in the same referendum for independence. People of those areas might have both referendums at once. Kurdish leaders have also highlighted that Baghdad would rather cooperate than force them taking other ways. And although this referendum is non-binding, there is little point of holding the referendum other than going independent.

For the Kurds, every major conflict of the 20th century in the larger area has resulted in a Kurdish entity. The WWI ended up with the Kurdistan Kingdom of Sheikh Mahmoud in Suleymania area. After WW2, the Kurdish Republic in Mehabad (Iranian Kurdistan) was formed. The current Iraqi Kurdistan Region was the result of the Iran-Iraq War and the Gulf War in 1991. The Iraqi invasion of 2003 was a strong boost to the autonomy of Kurdistan Regional Government (KRG). The developing Syrian Kurdish semi-autonomous administration came about as a result of the war in Syria in 2011. Similarly, the Republic of Kurdistan will come out amid all the regional and local conflicts in the area, very likely by the end of 2017.

Ari Mamshae is studying for a Master of Public Policy at the University of Oxford’s Blavatnik School of Government. He has been working in the KRG since 2012 as a personal staffer of President Masoud Barzani. He can be found on Twitter @Mamshae
Conflict and stability Democracy and politics