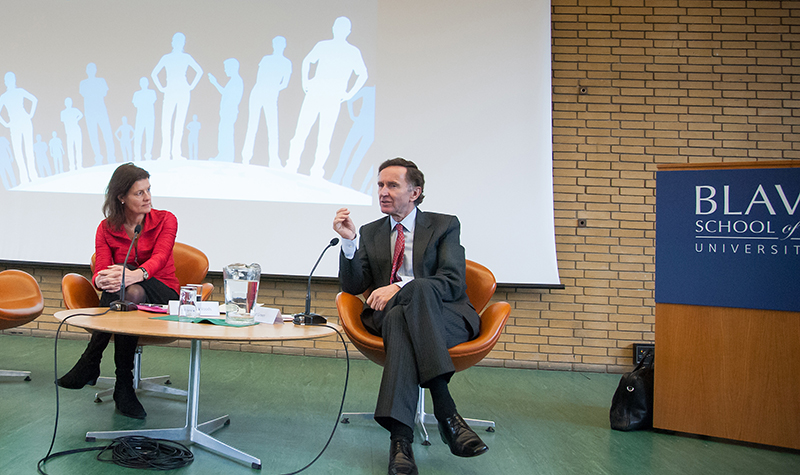 Social media can voice people’s demands, here and now. But they also often disperse or distort the original message, by mixing diverse audiences into a single communication channel. Users of social media who claim to reflect the “voice of the people” face a dual responsibility and challenge to accurately and adequately relay its messages.

At the Blavatnik School's Challenges of Government Conference on 9-10 December, Stephen Green, former UK Minister of State for Trade and Investment, took a range of questions on the financial crisis as a case in point about the tension between political leadership and its people-powered legitimacy, and the constraints of public engagement tools, including but not limited to social media. Here we draw together some of the key discussion points he raised.

What is the role of finance in and for society?

Christine Lagarde once said, “the financial industry is a service industry: it should serve others before it serves itself.” [1] Echoing Lagarde’s view, Lord Green noted that the financial sector is crucial for multiple parties; governments rely on the financial sector for capital, and society requires a healthy banking system in order to thrive.

Yet, there is a disconnect between people and the financial world. Lord Green observed that the morning after the 2008 financial crash, bankers’ main concern wasn’t the possibility of facing imminent public protests but predicting which bank would collapse next.

Not necessarily. In fact, if finance provides people the means to organize productive economic activity, then bankers’ initial preoccupation with avoiding systemic collapse rather than facing public shame is legitimate. The role of the bankers is indeed to guarantee people access to capital. But let’s take a step back: aren’t bankers responsible for the crisis in the first place? Didn’t they allow for “irrational exuberance” [2] to cloud their decision-making?

The gap between people, governments and the financial sector

Realistically, it seems like we cannot expect banks to uphold the democratic principles of acting for the people. Perhaps that’s a prerogative of governments. However, the financial crisis sheds light on a set of related issues that governments will have to address today and tomorrow to preserve legitimacy and effectiveness.

Lord Green suggested that campaigners recognize the complexity of today’s financial and economic system. Perhaps governments should too? As the recent crises have revealed, governments too often do not fully understand the financial environment in which they move, perhaps due to a lack of business expertise. If governments were to make it a priority to bridge the skills deficit between the private sector, elected political officials and, most importantly, the people, then it would be possible to make more effective and constructive demands for accountability.

To compartmentalize or bridge public, private and social spheres?

The question of accountability relates to the impossibility of compartmentalizing private and public values and interests. Today we live in an unprecedentedly interconnected world where public, private and social actions intersect frequently. This exposes each sector to a butterfly effect: a small change in the financial sector, for example, can turn into a tornado for the people; conversely, people campaigning against the private sector, including banks, can bring about unexpected changes. Hence, to regulate the system cohesively, governments will have to engage a wider audience: people, private sector and non-governmental sector.

Finally, it is worth noting that these issues of accountability become more challenging as we move from the domestic to the international level. Intergovernmental relations, unlike those between citizens and their states, are governed by a mix of consensus and, realistically, unilateralism rather than representation. The limits of public campaigning tools, including social media, are even more visible in this arena where international borders physically and politically restrain effective, tangible mobilization. After all, as Jeremy Heimans, CEO of Purpose, noted in his opening remarks at COGC 2013, tweets alone cannot construct a movement; you need genuine grassroots mobilisation to bring about change. And in the words of Ngaire Woods, Dean of Oxford’s Blavatnik School of Government, social progress still requires the “touch, feel and brand that citizens can trust.”