Law, nationalism and absurdity: The case of Coldplay and the Indian flag 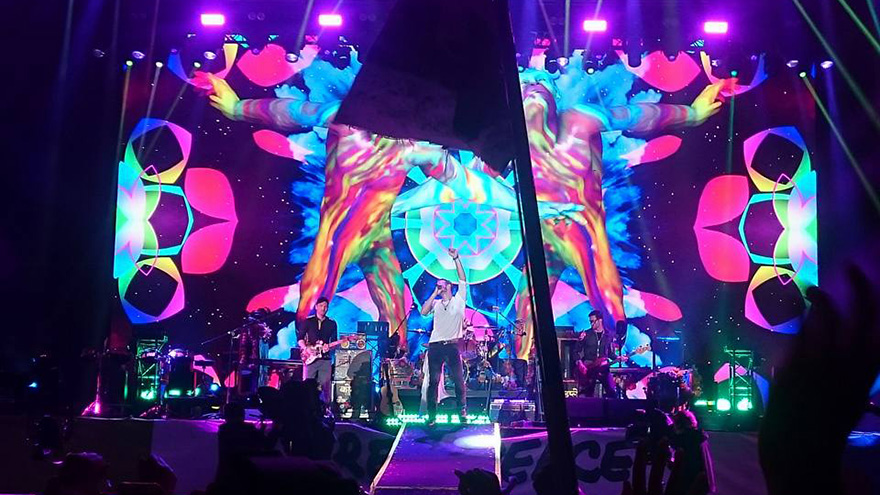 Coldplay performed in India for the first time last weekend. The band was promoting a sanitation campaign at the Global Citizen Festival on World Toilet Day. It was a grand occasion for Indian music lovers and a rare (if not unique) chance for the sub-continent seeing performances from world famous musicians like Chris Martin and Jay Z.

The Indian Prime Minister Narendra Modi even shared the spotlight, addressing the 80,000+ crowd who had turned up to see their favourite musicians. Modi’s appearance was not surprising, considering that his ambitious “Swachh Bharat Abhiyan” (Clean India Mission) against open defecation, launched in 2014, was now being supported by some of the most celebrated artists in the world.

The real shock of the evening came after the concert though, when Coldplay’s lead singer Chris Martin was accused of insulting the Indian flag. As he often does in his shows, Martin performed with the host country’s flag on the stage. While his running and waving with the flag pleased many, the act of tucking the Indian tricolour in the back pocket of his jeans irked some local politicians. Immediately after the music festival, these leaders started demanding an unconditional apology from the artist for, allegedly, disrespecting the sentiments of 1.2 billion people.

While the accusation in question might seem absurd to many, Chris Martin’s act does seem to violate Indian law. Under section 2 of the Prevention of Insults to National Honour Act 1971, “whoever in any public place […] burns, mutilates, defaces, defiles […] or otherwise shows disrespect to or brings into contempt (whether by word […] or by acts) the Indian National Flag […] shall be punished with imprisonment for a term which may extend to three years, or with fine, or with both”. Importantly, Explanation 4(e) to the same provision defines “disrespect to the Indian national flag” to include using the flag as an “accessory of any description worn below the waist of any person”.

If legal action were to be taken against the Coldplay singer, it would not be the first time this law has been used to protect the ‘sentiments of the people’. Almost a decade ago, the Central Government directed the much loved Indian cricketer Sachin Tendulkar to remove the Indian flag from his helmet and other cricketing gear as they argued this disrespected the flag. In 2014, a popular Indian actress was charged under the same law for sitting on top of a car wrapped in nothing but the Indian Tricolour in a movie poster. Earlier this year, none other than Prime Minister Modi found himself in hot water when newspapers published images of him wiping the sweat off his face with the Indian flag on International Yoga Day. Given Indian courts have not imposed any penalty in any of these cases, it seems unlikely that the Indian courts will make an example out of Chris Martin (even though he is a foreigner). Even so, this situation does create an opportunity to re-evaluate some of the dated Indian legislation and its effect on society.

Back in law school, I often grappled with the question of whether law creates morality, or morality creates law. While the answer to that question is complex, it is undisputed that both law and morality serve to channel our behaviour. The important distinction and similarity, in the words of John Gardner, the celebrated professor of law and philosophy at Oxford, is that: “Law, unlike morality, is made by someone. So it may, like morality, have aims, which are the aims of its makers (either individually or collectively).” Further, in many cases, law over time helps in shaping the social understanding of “right” and “wrong”. For example, it is hard to imagine that Tendulkar, Modi and/or Martin actually intended to disrespect the Indian flag. Yet, it is not hard to imagine people taking offence at their actions, since the law defines them to be offensive.

In the Indian context, it might be a good time to question the aims of the drafters of the Prevention of Insults to National Honour Act 1971. Have these aims been achieved? With a substantial change in conditions (India developing from a young, fragile, war-ridden state to the world’s largest and possibly strongest democracy), should such a law exist in perpetuity? Does a State need to prescribe and micromanage the behaviour of its citizens regarding a national symbol? Should the citizens be extended greater freedom with national emblems? Given national emblems are symbolic of the State, is it reasonable to place restrictions on freedom of expression in what will usually be a highly political context?

A utilitarian might argue that, for a diverse country like India, it is still important to cement a sense of pride of identity in citizens through coerced respect for national symbols. Also, some people can be genuinely offended and upset by disrespecting such national symbols, which is undesirable. However, against such arguments, it must be stated that prescribing how people should act necessarily removes their ability to foster a self-created national identity and free thought, which is vital to a vibrant democratic civil society. Further, if no free Indian is not allowed to express their dissatisfaction with the nation state by disrespecting one of its symbols, then one of the core values of the freedom struggle is lost in the pursuit of utility. The need to have a fundamental right to freedom of speech is to protect the voice of the person we do not agree with. The point of having a free country, where liberty, equality and fraternity flourish, must be to have free people who can actualise and exercise their freedom.

There are no simple answers here. It took the United States of America, where freedom of speech is far more protected than in any other country, decades of struggle between the legislature and the judiciary to settle whether an individual's right to freedom of expression included the right to disrespect the Star Spangled Banner. The election of Donald Trump may well change this status quo, given Trump stated on the campaign trail that he wanted flag burning to be made illegal. Ironically, it was Trump who benefitted the most from free speech. The changing political climate across the US, Europe and even South Asia seems to indicate a strong nationalist wave, engulfing the so-called “era of global citizens”. In this new context, what role should law play? I would imagine, in times of changing political opinion, that law is used as a tool to ensure that there is a prevailing sense of fairness and justice for all the people.  Policymakers will need to give serious thought to how different legal systems can tackle an increasingly insular, identity-driven, and aggressive political climate. For me, among other things, I hope the law plays a role of reducing absurd and dangerous views in society, so that after a Coldplay concert in Mumbai, I do not wake to headlines like ‘British are back to insult our nation’.

Diwakar Kishore is an alumnus of the Blavatnik School of Government (MPP Class of 2015). He is a lawyer and has particular interest in India’s legislation around Right to Education.
Law Democracy and politics