Informal vs formal recycling: the dilemma of e-waste management 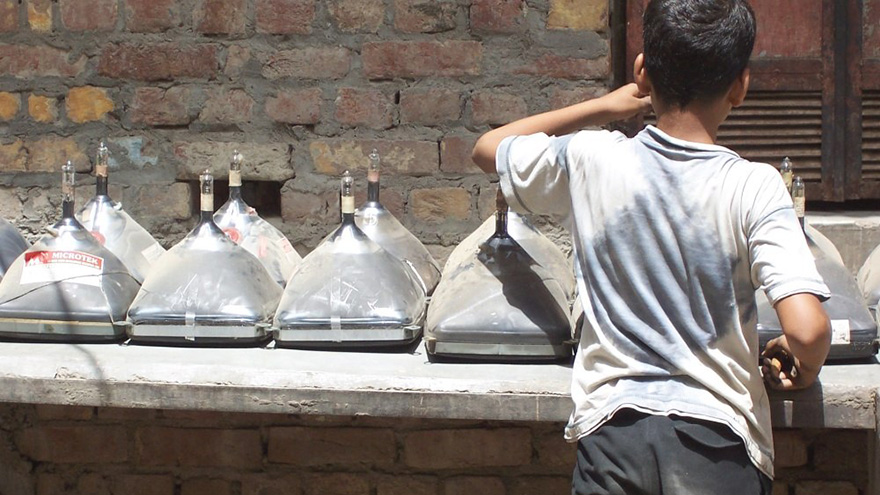 One of the most exciting activities I did during my Erasmus Mundus International Joint Master Degree in Europe was a trip to Paris with my cohort classmates. Standing just underneath the Eiffel Tower, I was completely amazed by its grandness and elegance, particularly when it lit up at night with different colours. But did you know that we humans generated a staggering 44.7 million metric tonnes of electronic waste (e-waste) in 2016 — the equivalent of 4,500 Eiffel Towers? Asia, with its growing economies, accounts for more than 40 per cent of the total e-waste generated globally nowadays.

One of the ailments of growth in developing economies is existence of informal economic sectors. I have theoretically explored possible strategic scenarios of international cooperation on e-waste management and also previously shared some stories on how severely the illegal dumping of e-waste by developed countries to developing countries threatens the environment and health of the global poor, and how much these developing countries are in dire need of new business models of more inclusive waste management systems.  Informal recycling is usually represented by the image of scavengers who live on waste picking and material segregation at the bottom of pyramids in all societies. It has sometimes been said in the developed world that the existence of scavengers is the shame of a decent society. Arguably, informal recycling is notorious for a list of sins such as environmental contamination, backyard industry, cherry-picking misbehaviours, hazardous health impacts and hidden flows of materials. While the efforts toward an environmentally sound management of waste in a prosperous and highly automated society are admirable, the rest of the world have unearthed variegated solutions in the practice of recycling that are also more inclusive and cost-effective.

Developing countries such as India, Brazil and China have found their own way forward by empowering organised informal recycling via cooperatives and public private partnerships. When policy decisions are effective in creating space for organised scavengers, developing countries reap a myriad of socio-economic benefits such as poverty eradication, job creation, municipal budget savings, resource conservation and environmental protection.

In recent years, the production and consumption of electrical and electronic equipment has soared. The developing world was forecasted to generate double the amount of discarded computers than the developed world by 2030, and surpass the e-waste growth rate in the developed world this year, 2018.

In response to this, legislations, conventions, directives, laws and international initiatives have been extensively enacted in the developed world during the past decades to tackle the e-waste problem. In Europe, each EU member state organises a register of electrical and electronic engineering (EEE) producers for the purpose of reporting and monitoring the recycling system. This is a way to ensure proper handling of e-waste – only officially reported Waste Electrical and Electronic Equipment (WEEE) is guaranteed to be recycled in a socially and environmentally responsible manner.

The EU Directive gives an example of why national registers and compliance schemes are necessary for better e-waste management. In compliance with national registers of the WEEE Directive, e-waste disposal and collection systems have been set up in hundreds of European cities by formal recyclers, particularly under the schemes of producers’ responsibility. Notwithstanding such effort, Europe could only manage to collect one third of its e-waste in compliance schemes, with the rest lost in uncontrolled flows.

But if the approaches in handling e-waste problem in developed countries and developing countries are significantly different, so are the challenges. For developed countries, the challenges mostly lay in managing a sound take-back system and curbing illegal leakage of e-waste flows, while balancing the trade-off between efficient material recovery and labour costs. In addition, rich societies can afford the automated collection and recycling systems, and their citizens generally have high environmental awareness and self-motivation to dispose of e-waste in designated points. Poorer societies instead need specific technical solutions matched with their socio-economic conditions, rather than replicating the approaches from industrialised countries. For developing countries, in absence of effective policy and legislation, management schemes and technological know-how, the e-waste problem as a more complex environmental and societal issue and faces constrains such as informal activities, lack of sufficient investment, lack of technological know-how, intricate trade networks, active refurbishing activities and so on.

A successful example in this regard is Brazil, where organised waste pickers enjoy a legitimate occupation and stakeholder identity. Waste picker organisations are emerging in Argentina, Brazil, Columbia, India and China. Formalisation of recycling does not necessarily mean creating a parallel compliance scheme that immediately jeopardise the survival of the scavengers, but rather legalising and incorporating waste-picking activities.

A while ago, I interviewed an expert on waste management from Asia. He candidly acknowledged the problem of kicking out informal sectors: “In some developing countries we have found that if political interventions are abused to favour the monopoly of a formal recycling actor by kicking out all informal recyclers from the market, the result sometimes turns counterproductive. Once all informal recycling individuals are eliminated, the formal recycler de facto holds the power to force the government for continual subsidies, while the government can only rely on the formal recycler under the pressure of devastating amount of waste to be cleared everyday…   Therefore, the best strategy for the government is to let the two sectors compete while incorporating waste pickers in the waste management system through cooperatives or public-private partnership.”  Besides, researchers at Harvard University also revealed that the complexity of e-waste recycling system indicated other issues to be addressed in the formal e-recycling industry, despite the improved environmental and occupational health conditions compared to those in the informal sector. Hence, perhaps the best strategy for governments in some developing countries is not to ‘kick out’ or ‘eliminate’ the informal players but instead to design a platform to integrate them, while letting them compete during the transition phase.

For instance, beyond the effort in banning waste import to safeguard health, the Chinese government has also designed and implemented the household appliance ‘Old-for-new trade-in program’ during the last couple of years as an innovative instrument that helps government balance between cultivating formal sectors and creating value from informal recycling. Government agencies provide subsidies to retailers, collectors and recyclers to close the loop of e-waste. It achieved some benefits: boosting domestic purchases for new products so as to leverage economic growth in the post crisis depression, piloting new recycling models for waste management, achieving inclusive and sustainable industrial development by incorporating the socially vulnerable people via integrative approach. The lesson from China’s pilot actions in forming circular economy and ecological civilisation is helpful for other developing countries as well as developed economies. This echoes United Nations Under Secretary-General Erik Solheim’s recent opinion that "China’s philosophy on ecological civilisation should be a model for other countries to follow." Particularly on the ground that ‘positive actions in ecological and environmental protection have brought more employment opportunities and created better, higher-paying jobs to benefit the least well-off positions of society.’

Yanzhu Zhang is an alumnus of the Blavatnik School of Government (MPP Class of 2015). He is currently working at the World Bank headquarters in Washington D.C.
Technology Climate