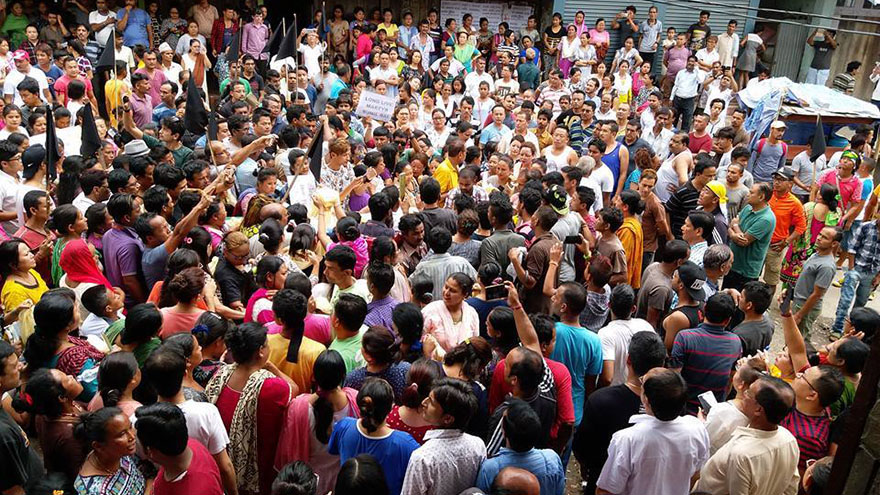 Darjeeling is a district in the Indian state of West Bengal which shares the border with Nepal, Bhutan, and Bangladesh. A globally renowned destination right from the days of British colonisation, its landscape, toy train, tea gardens, and timber resource made it a popular destination for visitors throughout the 20th century; it is a tourist destination even today in this political turmoil it is facing. However, with the pace at which the development is receding, the ‘queen of hills’ may soon go into ruins. At present, Darjeeling is facing indefinite strike, and tourism – the main economic resource of the state – is suffering.

But declining economy and failing development are not even a pressing concern right now, as the more burning issue today is the human rights violation. The world needs to know that Darjeeling is in turmoil and pain inflicted by their state and national leaders. The human rights of the residents of Darjeeling hills are being violated while the government is occupied in the disorderly classroom quarrel scenario between centre’s Bharatiya Janata Party (BJP)’s and state’s Trinamool Congress’ (Bengal’s ruling party).

Seven killed, hundreds injured, voices suppressed, human lives mishandled, women and elderly beaten-up, protesters arrested, internet shut, and cellular networks blocked; the media channels are not even covering the situation in the hills, and the few channels that are covering are only focusing on the politics of it.

In June 2017, West Bengal’s Chief Minister Mamta Banerjee’s racial-political motive to impose Bengali as the compulsory second or third language in schools across the district did not go well with the residents of Darjeeling, where the majority speaks the Nepali language. Language is emotive in India, and each community holds it as their pride.

This took an unexpected turn when the locals in Darjeeling came up to the streets in protest to save the legacy of their mother tongue Nepali. Violence broke out during the protests when the police fired open gunshots to unarmed public resulting in the death of of three activists. The reciprocation of the otherwise non-violent protest of the people with violence from the state government has fuelled the once suppressed demand of ‘Gorkhaland’ (a proposed separate state in India) and ignited the aspirations of the local community to have an autonomous state without any interference from the West Bengal government.

The queen of hills, Darjeeling, is burning in the fury of oppression, Bengali dominance, and human rights violations due to its almost century-old demand of a separate state. Behind such demand lies a multilayered story of difference in language, development, racism, and identity crisis. With each central government election campaign, the ruling parties – be it Bharatiya Janta Party (BJP) or Indian National Congress (INC) – fuel false hopes of Gorkhaland, which never gets momentum once the party becomes incumbent.

Since June 2017, in addition to the three activists from the local party who were shot, four more deaths occurred. The unrest has now further intensified with the ongoing police raids in the areas of Darjeeling. The vehicles from the hills are being vandalised in Siliguri, the city that connects rest of the Bengal to Darjeeling and the only source for food and other necessities. This does not stop here; there are other reported incidents of violence – verbal and physical – on Nepali-speaking Indians studying in other parts of Bengal and India too.

 The internet and cellular services were shut for weeks in the area in an attempt to curb the protests rendering people voiceless and curbing their freedom of expression. The United Nations Human Rights Council (UNHRC) recognises these kinds of measures to prevent or disrupt access to internet services as a violation of human rights. Many activists were also arrested from a Gorkhaland protesters' rally in Delhi on July 8th.

This process of protest leading to human rights violation and rights violation leading to protests again is a vicious cycle which has ripple effects in other important aspects of social survival such as public health, sanitation, emergency response, hospital facilities, food supply, education, etc. These inevitable underlying issues will also arise if the strike continues and the situation is not controlled. For instance, the many boarding schools in Darjeeling hills which are shut at the moment are already foreseeing a shortage of food and other consumables if the situation persists.

Conflicts are mushrooming, human lives are taken in the name of law and order, and free speech is curbed. Government should protect its citizens and their rights, but their actions speak otherwise. Is this another Kashmir in making? Or does the government feel it’s too small an issue to be prioritised? The people of Darjeeling are the victims of communal violence and abuse and are labeled as 'terrorists' on their own soil while the political blame game is on, with central government blaming the state for badly handling the crisis and the state government blaming the centre for not intervening.

There’s the need for the government to patiently listen and actively consider the demands of the people of Darjeeling hills in order to stop this from progressing into another lengthy conflict. At the same time, the international community should activate its partnerships with local NGOs and civil society organisations to advocate and protect the human rights in Darjeeling, identifying and highlighting the ongoing violations and pressure the government to take prompt steps to solve this issue.

Pragati Sharma is currently studying for an Master of Public Policy at the Blavatnik School. She has worked in the public health sector in India with Unicef and Jhpiego and has an active interest in human rights issues.
Conflict and stability Law
...
Inclusion Democracy and politics