Indian Elections: Should I aspire to become a Modi, RaGa or Kejriwal? 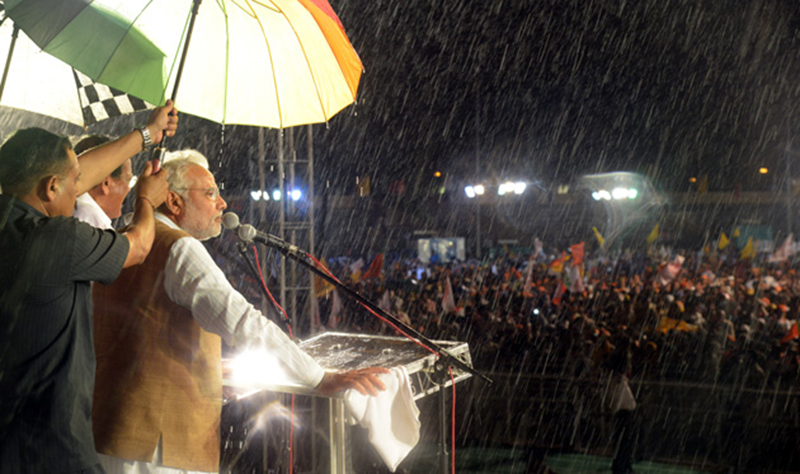 I often ask myself – whom should I consider a role model if I get into electoral politics someday? This is indeed an increasingly relevant question in an Indian context as we are witnessing a personality centric US presidential style campaign in 2014 national election. For the sake of this article, I want to restrict my choices to three personalities whom I have been following very closely in the last eight months. This is going to be an entirely personal account, although, the ‘I’ in this write-up represents thoughts from 33 of my bosom friends, who are between 22-33 years old and belong to the highly aspirant Indian middle class. 


Whenever I do a parikrama of Narendra Modi's life from a tea vendor to a prime ministerial candidate, I feel the same optimism I felt sitting in a college room in Guwahati watching APJ Abdul Kalam becoming India’s president. I share this optimism with my friends from China or Egypt, holding high the flag of ‘thriving democratic India’ where any Tom, Dick and Harry can attain the highest powerful authority by his or her own ability. Modi inspires me to work hard; his anecdotes make me reflect back my own life; I get fascinated by his superb oratory skills and I try to follow his advice ‘Aspire to do something, don’t aspire to become someone’. When I listen to his personalized messages for social communities, ethnic clutches or age groups, I feel like trusting Modi for bringing back our black money from the Swiss Bank, taking India to a double digit growth rate and providing employment to my childhood friends who couldn’t finish education because of economic reasons. When my friend from France asks about the height of the ‘statue of Unity’ and my uncle from Manipur thinks of donating an iron piece for the proposed statue, I can’t help but appreciate the underlying intelligence in Modi’s strategies. On the US visa issue, when Modi takes us imagining a future age when native and Indian Americans would queue up for Indian visa, I imagine myself being a proud permanent citizen of world’s most progressive country. I become elated; India wants a leader like Narendra Modi - I scream.

Then I take a pause. Modi abandoned his family, spent a significant portion of his life devoting himself for a religious organization, worked tirelessly with grass-roots in seclusion for several years. Can I live without my Maa and siblings, become ‘more’ religious, go straight to a remote village soon after finishing Oxford – the answer is unfortunately no. Modi chose a path less travelled which a normal family person like me finds hard to get aboard. However, it is not important whether I can become a Modi, but it is very important whether every Indians look him as their trusted representative. When I ask my friend Sayeed about this trust, he seems very skeptical. Then I also happen to read the emergence of dictatorship around the world, and start questioning myself – how much strong and decisive leader do I want to rule my country?

“I don’t want to rule India, rather want to work as a servant of people” - Modi’s repeated assurance brings back my optimism to an extent. However, my judgmental brain sticks to this dilemma and waits for this most fascinating story to develop further.


During my school days, whenever I asked my father why we can’t buy two dresses at one time, he used to take me to his ancestor’s village, and my next question would turn into why we are richer than some villagers. When Rahul Gandhi talks about poverty as a state of mind, I don’t know whether to appreciate his philosophical mindset or to criticize his ‘high school’ thought. Let me be honest - we both think in the same stupid way many a times. And on a few occasions, those people who laugh at me are proved to be wrong; same is the case with him as well. Whenever Rahul Gandhi talks about grass root congress workers selecting their representatives rather than the ‘high command’, when he openly admits that his party needs to learn from Aam Aadmi Party, when he earnestly follows the instruction of his campaign managers to stick to a few sentences as answer for all questions in an interview, whenever he brings aggression into his speech without even bothering the context, I imagine a kid trying to toddle for the first time with all his sincerity. Any common men like you and me learn in this very way and I fully empathize with Rahul. However, there are two caveats - he is now 43 years old and his access to resources and information has been enormous. Rahul Gandhi is not like you and me; he is from the ‘great’ Gandhi-Nehru dynasty.

This is the point, I stop seeing Rahul Gandhi as my role model. Even in my wildest dream, I can’t enjoy even 1% of the privilege that Rahul Gandhi enjoys without his own caliber. Soon my conception of ‘thriving Indian democracy’ become blurs at the hand of one family. Being a congress worker, can I ever dream to become India’s prime minister? I see the fate of talented politicians such as Jairam Ramesh or Jaipal Reddy, and I get my answer. But are the politicians of the congress party fools? I read Mancur Olson’s ‘The Logic of Collective Action’ and get the partial answer of my question.

After understanding the collective action problems inside a large party like Congress, I compromise my dream of becoming India’s prime minister. If Rahul Gandhi can really transform himself by ‘learning stuffs like you and me’, I have no problem in accepting him as leader and work ‘under him’. However, my friends from China and Egypt now taunted at me, “Weren’t you talking about a truly democratic India where any Tom, Dick and Harry……………?”


“Who is Arvind Kejriwal, nobody cares. You only care about yourself; likewise, in a true democracy, you rule for yourself. And this can happen by steps a, b, and c”. I feel like listening to a super brilliant McKinsey consultant or a most articulated noble laureate whenever I listen to Kejriwal. I needn’t to born with a silver spoon nor I have to leave my family and sacrifice a significant portion of my human life; I can keep working, get married, do some social service and at an appropriate time, I can start a political career to become a public leader. For an aspirant middle class youth, Arvind Kejriwal is the perfect role model. I start the dream of a corruption-free India where my mother will get the pension without paying any bribe, where every penny of the political donation will be in public domain, where VIP cars will not cause traffic jams, where chronic capitalism will be brought down, where politicians will not wear kurta-pyajama and where bapuji’s Swaraj will be a reality. Amongst these new dreams, I recognize Kejriwal has also changed my thinking outline, whereby, I am not dreaming individualistically to become prime minister, but thinking collectively for a prosperous India. I feel good about myself, I feel more honest and a truthful Indian citizen when I look up to Arvind Kejriwal. When he declares himself anarchist to change the status quo, when he asks citizens to do a sting to curb corruption, when he sleeps on the street after becoming a chief minister, I pray to God so that this new model of minister ship becomes permanent in Indian politics.

This is the point, when I start doubting my choice for having Kejriwal as my role model. My political career will start with people voting for me, and I should focus on what they want, not on what they are oblivious. This conclusion obviously questions my moral and ethical ground for aiming a political career; however, I left with no answer. I live in a democracy, in fact the world’s biggest democracy and I am bounded by what the majority thinks to be true.

Thus, I reach the same point from where I started thinking about choosing a role model for my aspiring political career. Can the national election result will show some light on my thoughts - I’m pessimistic, although anxiously looking forward for the days to come. I also look at the profiles of other Indian political leaders, but fail to reflect myself into their lives or ideologies. One possibility is that the whole new phenomenon of personality centric election will go away in next couple of years and we will return into the traditional party manifesto politics in India. I don’t know; however, there is a third way as well.

Create a new leadership trend and you become a role model for the millions of highly aspirant middle class Indians.


About the author: Manjit Nath is a Master of Public Policy student at Blavatnik School of Government, University of Oxford. He belongs to the north-eastern region of India and currently a resident of University College, Oxford.