How journalism can still change the world 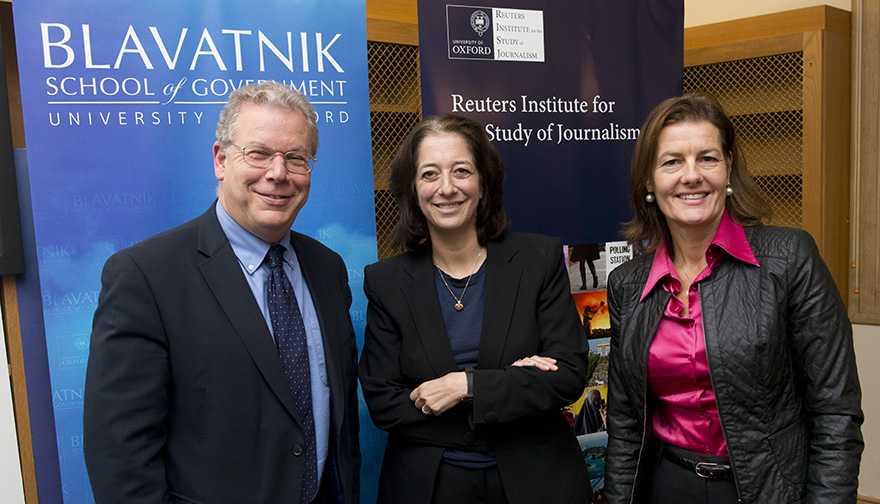 “How many of you read newspapers or use TV and radio for their news at least once every two days?”

The answer to such a question varies according to whom it is directed. A class of sixth-formers, the audience at a digital innovation conference or a bunch of colleagues at the pub on a Friday night will respond differently, but generally, not many will put their hand up. With widespread, instant access to information via the internet, the majority of people have lost the habit of using traditional media as a regular information provider.

However today in Oxford, almost every member of the audience puts a hand up – so many that even the chair, David Levy, who’s asked the question and should be used to this type of audience, betrays a hint of surprise. Levy is the director of the Reuters Institute for the Study of Journalism and alongside Ngaire Woods, dean of the Blavatnik School of Government, he is chairing a discussion with journalist-turned-professor Anya Schiffrin.

Schiffrin, the director of the media and communications programme at Columbia University, is presenting her new book Global Muckraking – 100 Years of investigative journalism from around the world – a collection of 47 pieces of journalism that have changed the world. It spans every continent and one hundred years, from Henry Xumalo, the South African journalist under apartheid who got himself arrested in order to better recount the prison experience and was later was killed as he was investigating abortion practices; to Palagummi Sainath, who still works today and made it his mission to tell the reality of poverty in India and whose writing had an impact on policymaking in the country.

As expected, the discussion quickly turns from the history of investigative reporting to the current state of journalism and its future. Students from Syria and Tunisia ask questions about the boom of citizen journalism and its dangers – physical and accuracy-related.

It’s interesting to see that despite the demonisation of the internet and social media, the attitude towards technology remains definitely positive. Yes, there is a lot of news out there, and not all of it is truthful or even interesting. Often it’s fragmented, superficial, sometimes misleading.

Email, Twitter and all the rest mean that journalists can connect with each other and with audiences in a way they’ve never been able to do before. Cross-border investigations are now relatively easier and it’s harder to keep the information secret (some of the atrocities described in the book went on unnoticed for over 10 years). The amount of data available is incredible.

The skills that a good journalist should have are even more precious: the news sense to find the right story that is interesting and accurate; the art of storytelling to convey a story to an audience through words and narrative; and good writing skills, seemingly a basic requirement that is too often overlooked.

Public policy students are interested in discussing the important role of government in public information. Should governments intervene to warrant a shared space for public conversation? The BBC for example is held as the gold standard for public broadcasting. But the Royal Charter would not work if applied in another country that does not have the political culture that surrounds it.

I think about Italy, where I am from. Do political parties think that pressuring the public broadcaster is wrong? The ‘equal time rule’ called par condicio (we love a bit of Latin in Italy) lost its meaning when Silvio Berlusconi – already owner of three private television channels and various newspapers – was elected prime minister three times. The Economist wrote that in 2001 he was controlling 90 per cent of the national television broadcasting.

Secondly, journalists should be impartial and feel accountable to the public rather than to whatever party is in power. As David Levy puts it, “there’s a difference between public broadcasting and state broadcasting. In some European states, journalists look up to the government instead of looking across towards the public.”

Journalists still play an important role in informing the public, but some questions remain unanswered – is it right to talk about ‘compassion fatigue’? And, even more urgently – is it enough to inform and outrage to generate action?

See more photos from the event on the BSG website.

Giulia Biasibetti is the communications officer at the Blavatnik School of Government. Find her on Twitter: @bgiulia
Democracy and politics Global cooperation