Hong Kong: Above and Beyond in Students’ Idealism 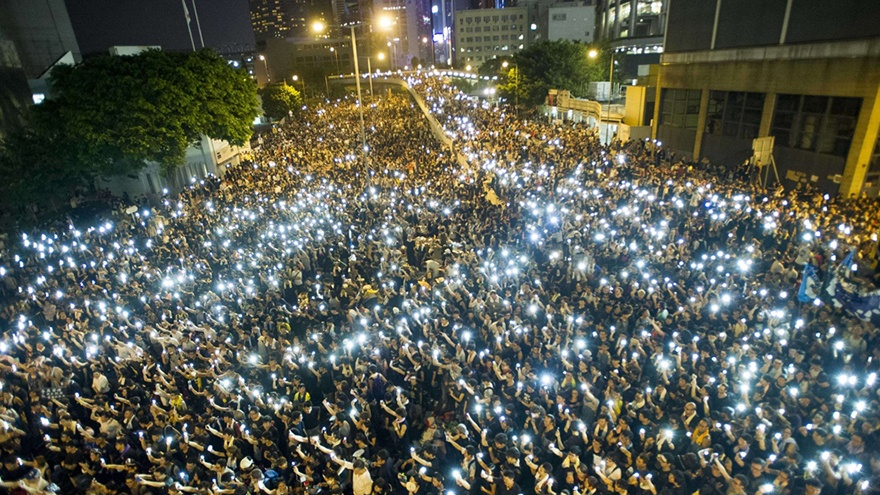 Why students are crucial in the territory’s democratic future

Like the typhoon that lashed Hong Kong last month, the Occupying Central Movement and student-led strike are in full swing.

Metaphorically, “One Country, Two Systems” is a “symbiosis” – like that of a crown fish and an anemone. While the symbiotic union between the two is usually mutualistic, it can turn antagonistic if inherent contradictions are ill-managed. In Hong Kong, politically, the enclave’s autonomy is challenged by the new Beijing leadership which gives priority to national sovereignty and security. Economically, income gaps, economic restructuring lag and high property prices are handy examples of conflicts arising from “double integration” of Hong Kong’s economy with that of mainland China and the World. Socially, language, cultural and value differences between Hong Kong and Mainland China have deepened mistrust. In essence, there is incongruity between the crown fish and the anemone.

How should this off-balance relationship be addressed? One episode in Chinese history strikes me as applicable – the episode of "Great Yu Controls the Waters". In the Yao Era (2356 – 2255 BC), Yu's father was appointed to stop floods that plagued Chinese heartlands. He spent more than nine years building dikes and dams along riverbanks. Albeit his efforts, flood persisted. As an adult, Yu continued his father's work. Instead of dikes, Yu built irrigation canals to relieve floodwater into fields. The system stopped the floods, allowing ancient Chinese culture to flourish along the Yellow River. To draw an analogy, student movement unleashes unstoppable political energy. Instead of bottling them, society should treasure the enthusiasm of students and guide their democratic aspirations to constructive dialogues. I cannot emphasize more that our leaders should gently channel students’ political passion to directional discussions on specific electoral proposals or aspects of proposals.

What should be the discussion focus? The Standing Committee of the National People's Congress (NPCSC) has decided that the city's next Chief Executive (CE) will be elected by popular vote in 2017. However, future CE hopefuls are required to win the endorsement of over half of the Nomination Committee to be a candidate. It is hard to see such stance be significantly conceded. But as NPCSC Deputy Secretary-General Li Fei ensured, reform details can be worked out through local legislation. Devil is in the details; but so is the angel. Detailed calculations can bring a more democratic election. The followings should be given due significance in coming deliberations-


With careful administration of these conditions, pan-democrats can be the critical minority in the Nomination Committee. The NPCSC's Decision in August 2014 states that there shall be two or three candidates for the office of the CE. Potentially, by expanding the number of pan-democrats in the Nomination Committee through local legislation, each CE hopeful requires the support of the pan-democratic camp. Pan-democrats, while fighting for the CE position on the off-chance in the near future, can leverage such Nomination Committee requirement to have a fair share in the SAR governance through the Principal Officials Accountability System (ministerial positions) or appointment to advisory and statutory bodies.

Students, with all good intentions, have kindled the political passion of our society. Nevertheless, ideals do not always translate into clear steer towards the right direction. Political leaders must understand what is possible and impossible at any given stage; and pragmatically lead Hong Kong towards social ideals, one step at a time. In the long-term, we aim for an election where all eligible persons in Hong Kong can fully exercise their right to vote and be voted, without unnecessary restrictions.

For better or for worse, students have again made their mark in Hong Kong history.

This article is reproduced from an opinion piece written by Ayo Chan and Emily Chan, published by the South China Morning Post

Emily K H Chan
Master of Laws in Human Rights, the University of Hong Kong. Chan was an Administrative Officer with Constitutional and Mainland Affairs Bureau, HKSAR.
Democracy and politics