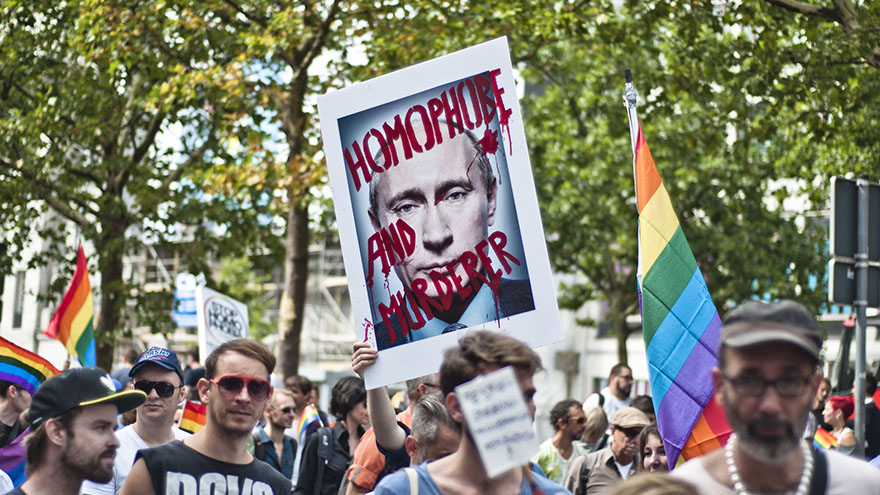 When someone refuses to sell you a pizza because you are gay, it is not fascism, it is bigotry. When they kidnap you because you are gay, hold you in a secret prison, torture you into giving up your friends’ names and then return you to your family saying “Either you kill him or we will”, now this is fascism. And this is exactly what is going on in Putin’s Russia today.

Last week, a shocking story hit the headlines: Ramzan Kadyrov, the head of the Chechen Republic of Russia, promised to “eliminate” the country’s gay community by the start of Ramadan. Although it’s far from secret that homophobia is state policy in Russia, the recent crackdown on homosexuals in Chechnya, a largely Muslim region in the North Caucasus, left petrified even those who closely follow Russian news. While the world is watching the Macron–Le Pen race in France, there is basically a full-scale genocide unfolding in Europe.

A month ago, Novaya Gazeta, a Russian newspaper known for its prominent investigative journalists, reported that Chechen security forces have arrested more than 100 gay men, put them in secret prisons and tortured them into giving up the names of other gays. “They beat us for the first few hours. I got some serious bruises, and they broke a few of my ribs. Then came the electrocution. There was a special coil with metal clamps that went on your ears or your hands, and then they got to work”, one of the victims told Russian news outlet Meduza. At least three men are believed to have been killed.

As if that wasn’t dreadful enough, the official reaction added insult to injury. Alvi Karimov, the spokesman for the Chechen leader, denied that gay people even exist in the republic. “If there were such people in Chechnya, law enforcement agencies wouldn’t need to to do anything with them because their relatives would send them somewhere from where there is no returning,” he said. Kheda Saratova, head of the Human Rights Council in Chechnya (yes, there is one), said she “wouldn’t even consider” any requests concerning LGBT oppression. Mufti Salah-haji Mezhiev, the spiritual leader of Chechnya, promised “retribution” to the journalists who revealed the information. “Allah will punish those who slandered the whole Chechen nation and Chechen Republic’s clerics,” he claimed.

I used to work at the Novaya Gazeta newspaper for two years. I would argue it is the most dangerous place to work for a Russian journalist — specifically due to the its investigations of human rights violations in Chechnya. Two of Novaya Gazeta’s  journalists, Anna Politkovskaya and Natalia Estemirova, were killed after investigating Kadyrov’s brutality. The newspaper is constantly under attack. This investigation was no exception: soon after the text about gays in Chechnya was published, the newspaper was bombarded by death threats coming from Chechnya. Consequently, the author of the investigation had to go into hiding.

The Russian government started its crusade against LGBT people five years ago, with the so-called “gay propaganda bill” — death threats, online bullying, physical attacks, uninvestigated murders and teen suicides followed. In 2013, my libertarian fellows and I were attacked in a Moscow bar for “looking gay”. But the Chechen Republic is a somewhat different story. We Russians have been living under Putin for 17 years and it is not easy to surprise us with human rights violations, but Kadyrov regularly manages to do so.

40-year-old Ramzan Kadyrov, who fought the Russian armed forces during Chechnya’s civil war, defected to Moscow when Vladimir Putin came to power. Kadyrov was soon named leader of the Chechen Republic. Loads of taxpayers’ money were poured on Chechnya to transform demolished ruins of its capital into a shiny Dubai-like city with Europe’s biggest mosque — as well as to buy the rebels’ loyalty.

The strategy has paid off to some degree — Putin’s rate of support in Chechnya is so high that the expression “Chechen results” is used to describe a suspiciously high electoral results of the ruling party elsewhere in Russia. Kadyrov himself is has regularly showed his loyalty to Putin in a way that makes even puppet politicians blush. “Putin is my idol! I love him, I respect him, I would give my life for him! I want him to be a lifelong president of the Russian Federation!”, the Chechen leader notoriously said.

Kadyrov’s actions exceed anything Sacha Baron Cohen depicts in his famous Dictator film. Unfortunately, events in Chechnya are hardly cause for mockery. The Chechen leader deserves a spot in the top-10 brutal dictators of the world along with Bashar al-Assad and Kim Jong Un. He never forgives his enemies. His personal army has been accused of kidnappings, torture and the murder of civilians. The stories of Kadyrov approving the marriage of a 17-year-old girl to a warlord or enjoying young children beating each other up at MMA competitions prove that he exercises absolute power in his domain.

Kadyrov is also blamed for the assassination of Boris Nemtsov, the Russian opposition leader who was shot dead in Moscow two years ago. Although the Chechen leader insistently denies any connection to Nemtsov’s murder, he continues to threaten Nemtsov’s colleagues. A few months ago he posted a video of Russian opposition politicians Mikhail Kasyanov and Vladimir Kara-Murza in the crosshairs of a gun on his Instagram blog. “Whoever didn’t understand will get it”, Kadyrov added.

Vladimir Putin goes at great lengths to demonstrate his influence to the world. He patronises Marine Le Pen, unleashes an army of internet trolls and floods Europe with fake news. You would think that someone like him would not tolerate another strongman in his backyard. He could bring Kadyrov in line, stop homophobic purges and restore the rule of law in Chechnya. But he won’t. Because the Kremlin fully and clearly approves what is going on in Chechnya. It needs an overly brutal ally like Kadyrov to spread fear among its opponents.

This article originally appeared in Students For Liberty's blog on 1 May 2017.

Vera Kichanova is currently studying for a Master of Public Policy at the Blavatnik School of Government. She is a Student for Liberty Local Coordinator and the first member of the Russian Libertarian Party to be elected into public office.
Inclusion