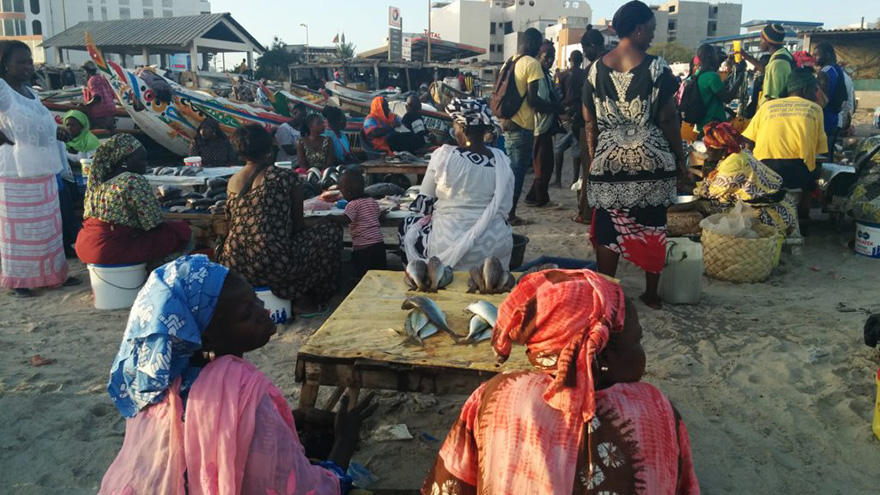 In February 2008 in Dakar, Senegal, a pregnant fish trader, who remains unnamed, was fatally hit by a police car. The car was attempting to displace her and her fellow fish traders from selling on public roads near the national highway. The story of her death was casually reported in local newspapers, with off-hand commentaries on the brutality of police forces and the poor working conditions of informal workers. There was no significant outrage surrounding her death. A week later, her fellow sellers were back on the road where her death occurred, selling fish as if nothing had happened.

The casual tone used to describe the fish seller’s death was perplexing and alluded to a politics of exclusion, whereby the suffering of some people is acknowledged and mourned while other people’s tragedies remain at the margins. Exclusion is a lived reality for most informal workers in sub-Saharan Africa, many of whom are women who live at the periphery of global and local production systems that have no use for them. In fact, the death of thousands of informal workers would have little to no effect on the global market.

While conducting research on informal fisheries in Dakar, I met Awa, an informal fish trader who has been involved in the business for more than 20 years. Awa dropped out of primary school and started selling fish at the age of 16, to help out her mother who was also a fish seller. Awa’s husband is currently unemployed, and so she is the main breadwinner in her family.

Awa’s average daily income is unpredictable, due to the nature of the fish-selling business. The day I met her she had travelled from Keur Massar, a shantytown in Dakar where she lives, to buy fish in Terrou-Bi Sougui, a beach located in an upscale area of Dakar. But she arrived too late, and found the fish boats docked along the beach empty. It would be a day without income. Days like this happened often, she told me, but giving up selling fish was not an option.

It is tempting to romanticise the work of women such as Awa as a manifestation of the courage and tenacity of third world workers, or under the trope of the courageous African woman, surviving despite poverty. It certainly requires courage and even ingenuity to sustain a family on informal work. However, such narratives tend to obscure the deep historical and socio-economic reasons that compel women to engage in informal trade as a survival mechanism in the first place. Informal trade resulted from the marriage of the Senegalese economic crisis in the 1970s, ill-timed neoliberal policies and weak exploitative institutions inherited from colonialism. The majority of Senegalese, struggling to find jobs in the liberal formal economy, resorted to the informal economy to survive. During the past 40 years, Senegal has been unable to absorb the surplus labour.

Awa describes herself as “banna-banna” a Wolof expression meaning businesswoman or entrepreneur. The women I met in informal fisheries are defiantly proud of their condition, as though implying that pity would infantilise and lessen the value of their work. Women have their own tontines to help each other save in times of needs. They are not waiting for the miracle of a functioning government to save them. While the pride of Awa and her fellow co-workers is admirable, the reality of their suffering cannot be denied. Informal workers do not have access to health care, safety, reliable revenue, and are often victims of police brutality. The Senegalese government regularly sanctions police raids to displace informal workers from public places.

Yet, what is the death of a pregnant informal fish seller in Dakar or Awa’s struggles to the suffering of sweatshop workers in Bangladesh or refugees at the borders of Europe? The magnitude of suffering seems to anaesthetise us. But anaesthesia is not on option. People like Awa are real. Their lives and struggles are meaningful. It is time as a global community to recognise our complicity in suffering and advocate for global policies that recognise the humanity of those at the margins.

This article first appeared in Africa Is A Country.

Aida Ndiaye is currently studying for a Master of Public Policy at the Blavatnik School of Government.
Inclusion Economy
...
Development