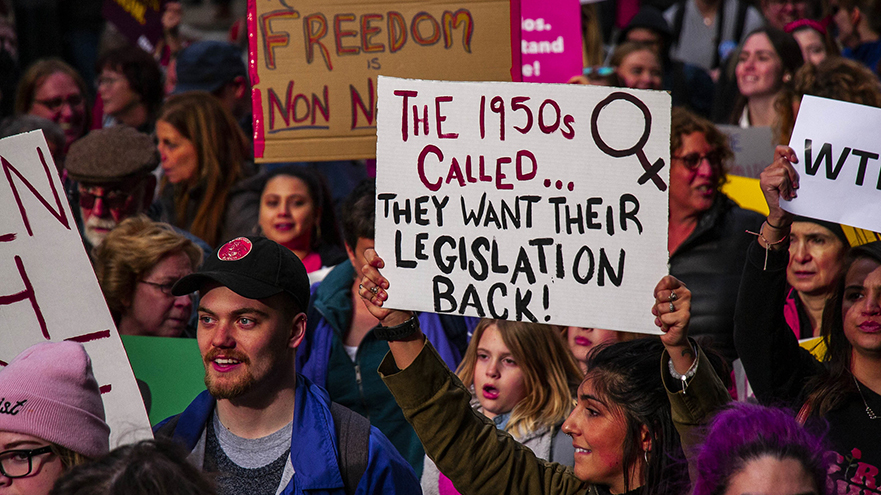 Last week,
the Senate of the State of Alabama passed the most restrictive abortion law in the United States.
It allows abortions only when there is a “serious health risk” to the mother,
precluding them in cases of rape, and raising penalties to up to 99 years in
prison for doctors who practice them. Leaving the substance of the law aside, I
am interested here in the fact that the 25 Senators who voted to pass it are
all white men. This gives
us a good opportunity to revisit, in terms of democratic legitimacy, the
philosophical foundations of electoral policies that promote the participation
of women in politics (like female quotas in electoral lists).

To begin
with, democracy is not a binary term. That is, countries and institutions are
not democratic or antidemocratic. Democracy is best understood, according to
political philosopher Adam Swift, as varying in degrees along four different
morally salient dimensions: (a) directness of decisions, (b) accountability of
representatives, (c) equality of influence, and (d) scope of the democratic
authority. I believe, however, there is a fifth dimension upon which to analyse
democracies: quality of representation.
In this sense, how democratically legitimate is a law that directly affects
women but is passed only by men?

But can’t
men represent women’s perspectives? Leaving aside the theoretical question,
this has been the argument to deprive women of the most basic democratic
participation (the vote) under the excuse that they were represented either by
their fathers or their husbands. Needless to say, this has done little for
women’s rights. Representation as perspective demands that representatives
belong and are voted by the group they represent, since it assures that they
share the social experiences of that group (and, among other aspects, reduces
the moral hazard of representation).

The second
step to analyse policies in terms of democratic legitimacy is whether they
promote or hinder any of the justifications of democracy. It is usually said by
critics that female  quotas affect the
freedom of both the electorate and political parties, and that they violate
equality by discriminating against men. Both of these premises are false. From
a starting point of structural inequality between men and women, both freedom
to choose and equality are formal illusions. How free to choose are Alabama
black women (namely the most affected collective by the passing of this law)
whose options in the voting booth are “white man A” and “white man B”? How
equal are women to men if, because of prejudice and a lack of opportunity, they
cannot gain access to elected office (not even to electoral lists)? The entire
point of affirmative action is to correct self-perpetuating structural
inequalities. What is attacked as a violation of formal freedom and equality is
nothing but a material attempt to equalise the playing field, unfairly tilted
toward an advantaged group (in this case, men). In other words, an attempt to
allow more than half of the population to be able to choose a better quality of
representation.

In the same
vein, female quotas promote two other instrumental justifications of democracy:
its capacity to reach better or correct decisions, and its perceived
legitimacy. First, promoting representation of women by women allows a more robust debate and deliberation within the
walls of legislatures, since it aims to include women who will bring with them
their different backgrounds and perspectives. Second, a democracy that is more
representative of its demos has a
better probability of generating compliance. Citizens are more likely to comply
with legislative decisions and view them as their own if they feel that those
who took them did so representing and debating their viewpoints. This is so,
since they will have a sense of having participated in the debate themselves.

But why stop
there? Why not create dozens of quotas? Intersectionality tells us that the
male-female dichotomy essentialises the experiences of millions of women (and
men) by forcing them to fit into boxes of heteronormativity. Far from negating
this framework of analysis, this critique invites us to deepen the discussion
in the same terms. That is, how can we continue to improve the quality of
representation? Of course, such a discussion will have to bear in mind other
dimensions and justifications of democracy as well as the feasibility and
constraints of balkanizing representation.

Finer points of democratic theory aside, however, the democratic credentials of this particular law and of the Alabama Senate, which has the lowest percentage of women in the entire U.S. (11,7%), are seriously in doubt. I do not intend here to propose a specific scheme of electoral engineering (uninominal districts like those in the US pose a much bigger challenge than other systems with proportional representation). What I do intend, however, is to recognise the salience of quality of representation as a morally relevant dimension for analysing the democratic credentials of a decision and a system. This entails the inescapable mandate of enacting electoral policies to try to achieve what common sense already tells us: that legislatures should look more like the people they represent.

Sergio Giuliano is an Argentine lawyer with an LLM from Yale Law School and he is an alumnus of the Blavatnik School of Government (MPP 2017). He specialises in constitutional law and international human rights law. He was legal adviser to the Minority Leader of the Argentine Congress and clerked for the Vice-President of the European Court of Human Rights.