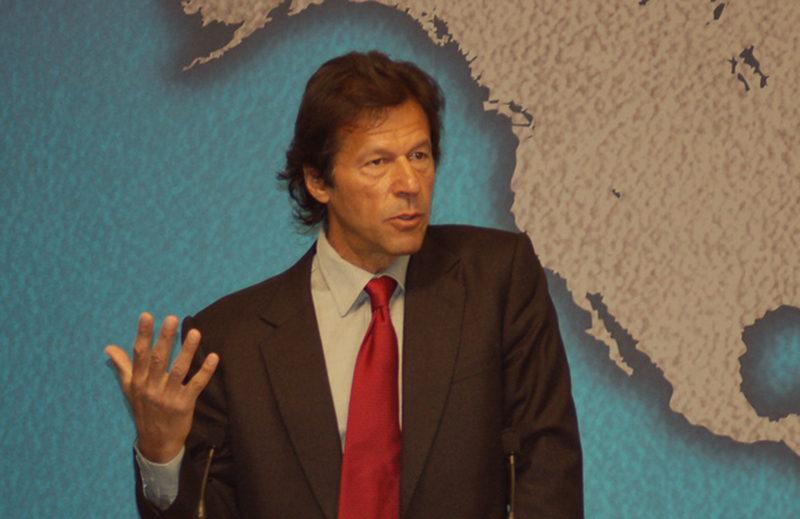 In an angry speech in the National Assembly on Monday, Pakistan Tehreek-e-Insaf Chairman Imran Khan urged all political parties to unite and stand up to the perceived American pressure to put an end to the drone strikes in Pakistan.

Earlier, reacting emotionally to the US drone strike that reportedly killed Hakimullah Mehsud, Imran took to task his critics on the issue of dialogue with the Taliban. Dubbing them “American mouthpieces” in a rather laymanish way, Imran seemed frustrated with the liberal intelligentsia for not appreciating his quest for the noble cause of peace. While Imran’s intentions may be genuinely benign, it is his misinformed, drone-centric narrative that deserves critical scrutiny.

In the realm of strategic studies, narratives are central to winning wars of ideas. Narratives are,

“Compelling story lines which can explain events convincingly and from which inferences can be drawn.” (Freedman, Lawrence. 2006. The Transformation of Strategic Affairs. Adelphi Paper 379. London: The International Institute for Strategic Studies, 22).

Narratives act as interpretative lenses through which average citizens are made to view certain ideas or events in a specific way.

In Pakistan, the right-wing narrative about terrorism, spearheaded by Imran and taken up by the PML(N), is based on presumptions that are flawed and perilously over-simplistic.

To begin with, Imran links militancy to drone attacks and Pakistan’s involvement in ‘America’s war on terror. Although the role of drones in fuelling militancy cannot be totally denied, it in no way justifies Imran’s facile viewpoint that reduces terrorism to drone strikes. Terrorism in Pakistan is neither a purely post 9/11 phenomenon nor is it exclusively a consequence of Pakistan’s involvement in the war on terror. Instead, terrorism is a product of Islamabad’s decades-long policy of using militancy as a tool for advancing its strategic agenda in Afghanistan and India. It is primarily the result of Pakistan’s “forward policy” in Afghanistan that began in 1973 and reached climax during the anti-Soviet Afghan jihad.

Contrary to the conventional belief, even in the 1980s, Pakistan’s frontline role in the Afghan jihad was not at the bidding of the United States. Rather, the military regime’s support for the Mujahideen was motivated by the traditional concerns of realpolitik about Pak-Afghan relations. Exploiting the Pashtun cultural code of hospitality and their love for religion, Pakistan, with the support of the US and her cold-war-allies, established massive jihadi infrastructure in the tribal belt, and indoctrinated and produced a generation of religious warriors.

Terrorism is primarily the outcome of this persistent investment in militancy. In the post 9/11 period, Islamabad could have tackled terrorism more effectively had it not played the alleged double game in the war on terror. Tacit support to the Afghan Taliban not only thwarted Pakistan’s domestic anti-terrorism efforts but also gained it a tarnished international image—a bitter reality Imran fails to consider when he bewails the perceived US indifference to Pakistan’s sacrifices in the war on terror.

Secondly, contrary to what Imran would want us to believe, Musharraf’s decision to become a partner in the war on terror was a pragmatic decision, though the terms of partnership could have been better. The post 9/11 world found Islamabad caught in a trap of its own making. Given geo-political constraints, Pakistan was bound to get involved in the ‘War on Terror’ in one or the other way. Even if Pakistan had refused to become a part of “America’s war”, the fleeing Taliban militants who would subsequently indulge in cross-border attacks from their sanctuaries in the Pakistani tribal belt would have eventually dragged us into the war. Ultimately, Pakistan would have had to choose an enemy between the Taliban and the US-led international coalition.

Imran naively assumes that the Taliban will renounce violence once drone attacks cease and Pakistan disassociates itself from the US-led war in Afghanistan. A mere look at the threatening pamphlets distributed by the Tehreek-e-Taliban (TTP) before elections provides deep enough of an insight into their ideology. In fact, TTP’s primary demands include the imposition of Shariah and the abolition of democracy which they regard as a “pagan system”. So, the Taliban are likely to continue fighting even if Pakistan withdraws from the war on terror.

The effects of negotiating with the Taliban

While dialogue is always preferable to over the use of force, the Taliban’s unconstitutional demands, however, offer very little room for negotiations. In this regard, Imran’s oft-repeated reference to American negotiations with the Afghan Taliban makes no sense. While in Pakistan’s case the State’s integrity and survival is at stake. The Afghan case involves a foreign power wanting to negotiate an exit strategy by talking to an indigenous group that it had previously overthrown. Having said that, if political leadership still considers negotiations with Taliban, lessons from the past peace deals must be remembered.

First, in most of the peace agreements, the government negotiated from a position of weakness, demanding too little and offering too much. Most of the agreements were concluded on terms favourable to the militants. Besides, in majority of the cases, significant financial compensations were made and prisoners were released. Almost every time, the militants used these peace deals to buy time to regroup and restrengthen themselves. Most importantly, agreements with militants legitimised their status as representatives of their areas and emboldened their social prestige and power at the cost of tribal elders. Not only was the centuries-old tribal system of dispute resolution by-passed but also the tribal elders were left at the mercy of these militants in the wake of each agreement. The eventual killing of scores of tribal elders destroyed the traditional social hierarchy and left a huge social void which was filled by the militants.

Pakistan and its ‘conspiracy-theory culture’

Imran Khan’s misinformed narrative is not only feeding an already deeply-entrenched conspiracy-theory culture but also contributing to legitimising the Taliban’s cause. It has weakened the country’s resolve to fight terrorism both at the popular and governmental level. Especially, the popular appeal of Imran’s rhetorical narrative has dissuaded the likes of Nawaz Sharif from adopting a more realistic and candid position on the issue. More importantly, Imran’s occasionally rash and overly self-righteous remarks are fuelling the country’s Red-Card culture— a tendency whereby anyone holding different views on important national questions is branded as traitor or a foreign agent.

Whatever the ultimate policy, what Pakistan requires the most, in confronting the menace of terrorism is an honest and well-informed narrative that offers a clear and realistic view of ourselves and the world around.

The current narrative at its best is confused, misleading and delusional. Pakistan needs to take off the self-imposed veil of ignorance and come out of the world of denial. The political leadership, civil society and media must articulate a public narrative that provides an objective and dispassionate account of the rise and growth of terrorism in Pakistan. It should also include, but shall not be limited to, a critical assessment and review of Islamabad’s Afghan policy.

Most importantly, Pakistan needs to convince itself of the need for a more responsible and peace-loving image in the global community of nations.

Rafiullah Kakar is a BSG 2013 Master of Public Policy student and Rhodes Scholar. Hailing from Balochistan, he was a member of the Youth Parliament Pakistan last year who occasionally writes for magazines and newspapers. He tweets as @R_kakar1

This article originally appeared on The Express Tribune blog.