Dean’s Forum at BSG: From newsmakers to a ‘news maker’! 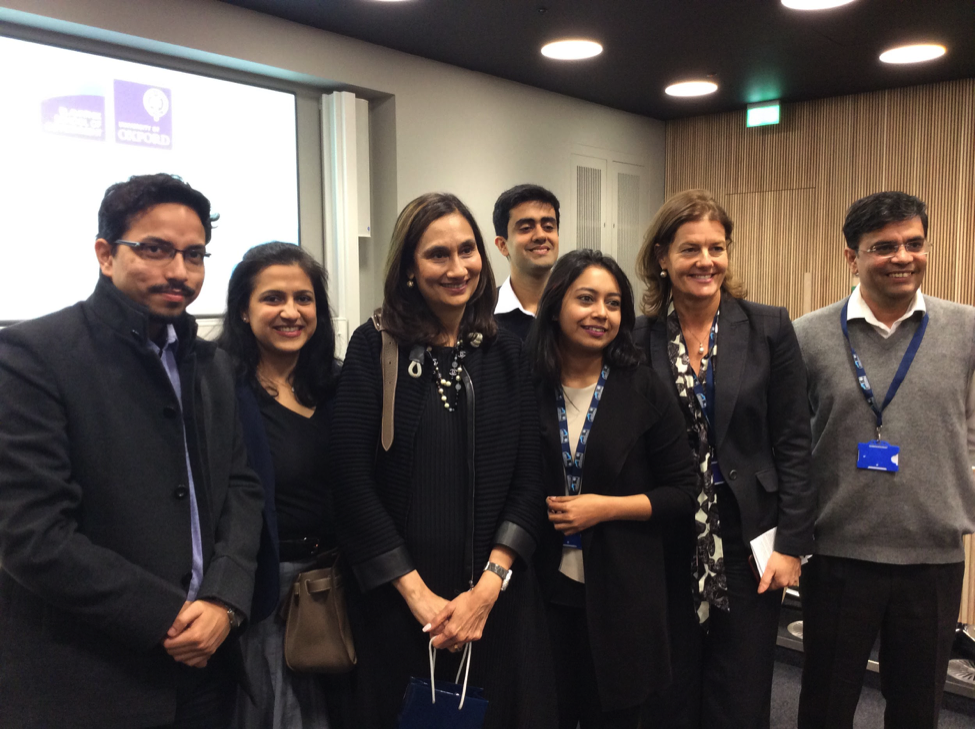 The Dean’s Forum at BSG is a great space for candid and often intimate conversations with newsmakers and opinion shapers from different parts of the world. The trend continued last week when we welcomed Shobhana Bhartia, the chairperson and editorial director of the Hindustan Times Group, to an afternoon of Q&A. The only exception, however, was that our guest this time was not just a newsmaker but also a ‘news maker’!

Mrs Bhartia’s company runs the Hindustan Times, India’s 2nd largest national newspaper (largest newspaper in the capital, she was quick to point out!). Between 2006 and 2012, she was also a Member of Parliament (nominated to the Upper House). This gives her a unique perspective on media and politics in India. Hence, many in the MPP cohort were eager to hear her thoughts on the role of media in politics, changes in the industry and threats to freedom of expression in India. Mrs Bhartia’s personal journey is also noteworthy. She joined the HT group in 1986 and successfully navigated a corporate world dominated by men to emerge as a highly successful businesswoman. And we were eager to draw lessons from her success story.

The media mogul began by describing the judiciary and the media as two important stakeholders in India’s democracy. In her view, these two institutions play an extremely important role in holding the Government and other public institutions in India accountable. She believed India’s press was free and vibrant, lively and loud, and at the heart of the political process. However, she expressed unhappiness with recent incidents of violence in the country. She saw attempts at curbing personal choices such as the beef ban as embarrassing and misinformed.

It was, nonetheless, very reassuring to hear her say that claims of a ‘chilling effect’ were somewhat exaggerated. In her view the HT group, and the national press in general, were not facing any undue pressure from the Government. She reckoned that the access to advertising revenue from different sources permitted her newspapers to think and act independently. Advertisers paid for the brand to be built over decades. She argued that local vernacular newspapers, however, were more susceptible as they relied almost entirely on government adverts or patronage. It was interesting to learn that without advertisements there is no profit in just selling newspapers. So the cost of a newspaper is actually worth less than the paper it is printed on!

This leads us to new business models for news. With the HT Group offering a full digital newspaper alongside conventional copies, Mrs Bhartia argued that news companies are now becoming content providers. She saw the fight for digital readership while maintaining credibility in the times of 24 x 7 breaking news and social media as one of the major business challenges for news companies. When asked if the HT group was making money through online content, she exclaimed, “That is a question everyone in the industry is trying to answer! Please get in touch with me if you have any ideas!”. Dean Woods reminded us that fighting for attention span was the other part of the challenge, with 55 percent of online readers spending less than 15 seconds on a page!

The conversation then turned to leadership, formative experiences and public commitment. Mrs Bhartia stressed that leadership skills were a crucial factor in her hiring decisions because the HT group is a large organisation and she needs leaders at each level. She attributed her success to perseverance and early stage mentorship by industry leaders such as Katharine Graham at Washington Post. She talked about her close association with the Child Marriage (Abolition) and Miscellaneous Provisions Bill passed in India in 2006. Describing the process she revealed that, “the Parliament in India works in small cross-party committees where the real details are discussed” and her contribution was simply building initial momentum for the idea.

The Q&A closed with our Dean, Ngaire Woods asking Mrs Bhartia to identify one issue that she would like to focus her energy on. Mrs Bhartia expressed her deep concerns over the state of healthcare in India. “If you don’t have a healthy population, there is no point thinking about how great the country is doing in other areas”.

In overall terms, I enjoyed the conversation with Shobhana Bhartia. I was encouraged by her assessment of print journalism in India as mature and fine quality journalism at par with the best in the world. The Q&A yielded a very interesting discussion on business models for news. I appreciated her straightforward style. However, we would have loved to hear more about the dynamics of the media-politics-election nexus and learn about her strategies for overcoming challenges. But I suppose this is the hallmark of a good ‘news maker’ - creating demand for the next edition!

Dinesh Kapur is currently studying for an MPP at the Blavatnik School of Government. The Dean’s Forum is a regular discussion led by our Dean and designed to provide students with the opportunity to connect with experts and practitioners from a wide variety of fields.
Democracy and politics The School