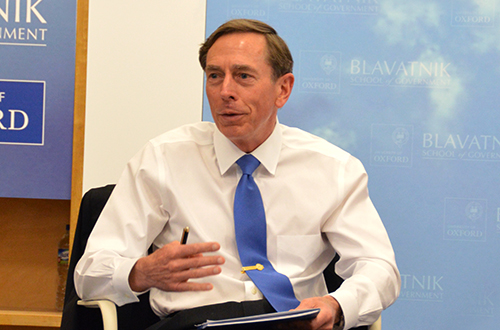 “Reflecting on what some term the 'counter-insurgency era'… I want to argue that this era is far from over, for the simple reason that the era of insurgency is not over.” - Gen. D. Petraeus.

On Tuesday 11th June, students of the Blavatnik School of Government (BSG) welcomed General David Petraeus to deliver a seminar on leadership. His talk was the finale of the Security Intensive Module organised by Professors Ivan Arreguín-Toft and Monica Duffy Toft.

Over the year at the BSG, we've been lucky to hear from many experts, across a wide variety of fields. Rarely, however, do you meet both the author of the strategy and the person responsible for its implementation.

The common thread between all successful practitioners has been their ability to provide leadership. Put roughly: their ability to set a clear vision, secure the buy-in of key stakeholders and marshal all necessary resources to achieve their goal.


Petraeus's track record demonstrates this, most notably as the author of the US military's counter-insurgency doctrine and as the man responsible for overseeing 'the surge' of 2007, where 20,000 additional US troops were deployed to Baghdad.

In his seminar, Petraeus drew from this experience, but also recently from his time as Director of the CIA and lessons learnt across his career in the military.

Petraeus' view on leadership was refreshingly straightforward. The leader's task is to set the tone for an organisation - to create a culture and an environment where individuals can “be all they can be.”

The strategic role of leadership is to get the big ideas right and ensure that they remain relevant and powerful. He stressed the need to communicate big ideas effectively, throughout your organization and to external stakeholders in the media and wider population.

The notable feature of Petreaus' leader is that they don't just do the 'vision thing'. The vision without an iron grip on delivery is obsolete – the leader must oversee the implementation of the big idea.


The tools for success are common to any organisation - a constant process of formal performance evaluation. Essentially, the effective leader must be able to adapt to the needs of their organisation, not the other way around.

In this way, the process of institutional reform must be iterative. Lessons learnt must be ingrained into the fabric of the organisation and become second-nature, in a process which is transparent, inclusive and interactive.

As the architect of the military's counterinsurgency doctrine, he spoke about the need to question old norms and to learn the right lessons. This points to his success, by integrating the lessons of counterinsurgency throughout military structures, whether in training exercises or lesson plans.

Success requires leaders to continually "estimate of the situation. "What is the situation of enemy forces? Friendly forces? What is the mission statement? These sound straightforward, but they underline the importance of intelligence.

This holistic approach to intelligence lies at the heart of the Petraeus doctrine, where every mission must have offensive, defensive, and stabilisation components. The military must tirelessly seek to understand the people it fights and think beyond the narrow confines of previous conventional wars.


General Petraeus' significance is that he stood tall at a time of emergency. Through intellect, dedication and sheer determinedness, he was able to drag the organisation which he loved to face up to new realities and shatter old assumptions about how war is fought and won.

With distance from his former posts, in the military and the CIA, Petraeus has – as appears his hallmark – reflected deeply on his experiences. What worked. What did not.

For a man who made his name in a country engulfed by flames, at a time pinpointed by many as the point when America began its slow, inexorable decline, his predictions for the future are striking.

For Petraeus, the next few decades belong to North America. The United States, with Canada and Mexico, will pull the world out of fiscal abandon, in part propelled by an energy revolution.


Petraeus' leadership is inspiring because he actually achieved what he set out to do. He analysed the problem, set the vision, secured the necessary support and executed his plan.

In person, at no point did he exude arrogance, but an honesty so unlike the false humility of many less-successful people than he. Aware of his failings, he represents an example to us all precisely because of the tireless application of his human traits: hard work, dedication and emotional intelligence.