Can corruption explain the success of Donald Trump? 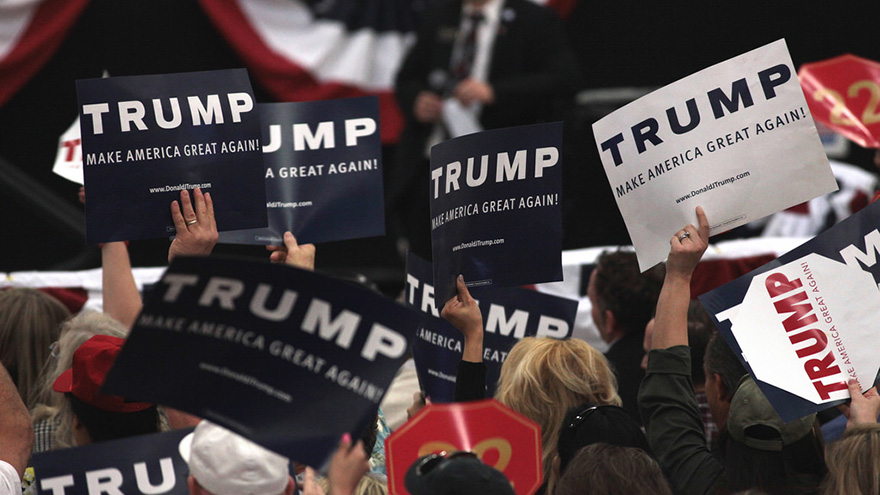 In a number of yearly polls, Gallup has reported that since 2010, between 73 and 79 percent of Americans agree that “corruption is widespread throughout the government in this country.” These staggering figures are by no means unique but there is considerable variation between countries, from 99 percent in Greece, to 26 percent in Denmark.

More than ten months before the election that made Donald Trump the President of the United States, the Chairman and CEO of Gallup, Jim Clifton, wrote: “The perception that there’s widespread corruption in the national government could be a symptom of citizen disengagement and anger. Or it could be a cause – we don’t know. But it’s very possible this is a big, dark cloud that hangs over this country’s progress. And it might be fuelling the rise of an unlikely, non-traditional leading Republican candidate for the presidency, Donald Trump.”

With hindsight, it seems that in January 2016 Jim Clifton was already on to something important. It is well-documented that in his campaign Donald Trump repeatedly accused the political elite in Washington, and especially his opponent Hilary Clinton, of various forms of very serious misuse of public office. Examples of his accusations against Hilary Clinton for corruption range from “she ran the State Department like her own personal hedge fund–doing favours for oppressive regimes, and many others, in exchange for cash. She gets rich making you poor”, to "Hillary Clinton may be the most corrupt person ever to seek the presidency of the United State... has perfected the politics of personal profit and theft".

Surveys show that the reason for Trump’s unexpected victory was his ability to get massive support from what has historically been the strong-belt for the Democratic party, namely low-educated, white working class voters. However, as Paul Krugman among others recently pointed out, this is a group who is likely to be the big loser from the policies promoted by Donald Trump in his campaign. Many would say that race and immigration determined this election, but this can only be a part of the story, because many of the areas where Trump got most of the white working class votes have few immigrants, and no significant multi-ethnic population.

Corruption has many forms, from what can be called “petty” to “grand”. Why the latter has resonated with a large part of the voters in this election is not hard to explain. The amount of private money which flows into and dominates politics after the ruling of the U.S. Supreme Court in 2014, in combination with the explosion of lobbyism, give ample ammunition to those who argue that the system is “rigged”. However, given Donald Trump’s huge business interests, it’s hard to demonstrate that he would be a suitable candidate for clearing up this system. Moreover, in terms of actually experiencing demand for bribes from public officials, this is not a huge problem in the United States – only 7 percent report to have experience of this.

Corruption is not an easy concept to define and the academic literature is, to say the least, not unified.  Empirical research, however, gives quite a surprising answer to what “ordinary people” in general perceive as corruption. What people come to understand as corruption is much broader than bribes. Instead, it is various forms of favouritism in which money is not necessarily involved. Things like access to good schools, getting a building licence or a public contract are often cases where people feel that decisions were not impartial and based on merit and clear rules. Instead, political, social or ethnic personal connections dominate who gets what.

In this context, the perceptions of corruption as favouritism may have delivered Donald Trump the US Presidency. First, one of the most surprising pieces of data that I have come across is that a majority of white people in the United States perceive that discrimination against whites is now a bigger problem that discrimination against blacks or people from Latin America. Even if this has nothing to do with reality, when people decide whom to vote for, it is these perceptions and not the reality that counts. Much of the politics from the liberal left in the U.S., including Hilary Clinton, has been focused on what is known as “identity politics”. In practice, this has resulted in targeted policies such as affirmative action, job and education quotas, to support women and various minority groups. Instead of focusing on universal programmes that include all, or at least very broad segments of the population, the policies presented by the Democrats and Clinton were seen as favouritism (to women and minority groups) by the white male working class, and therefore a form of corruption. Targeted programmes are also very vulnerable to suspicion about malpractice in the implementation process, because decisions about individual cases are often very complicated (who is actually eligible and how preferential treatment is justified). Universal programmes usually do not suffer from this problem.

“Identity politics” perceived as favouritism may thus be the explanation for why Trump’s “corruption strategy” paid off so well among the white working class. Mark Lilla has formulated this well: “In recent years, American liberalism has slipped into a kind of moral panic about racial, gender and sexual identity that has distorted liberalism’s message and prevented it from becoming a unifying force capable of governing… If you are going to mention groups in America, you had better mention all of them. If you don’t, those left out will notice and feel excluded.”