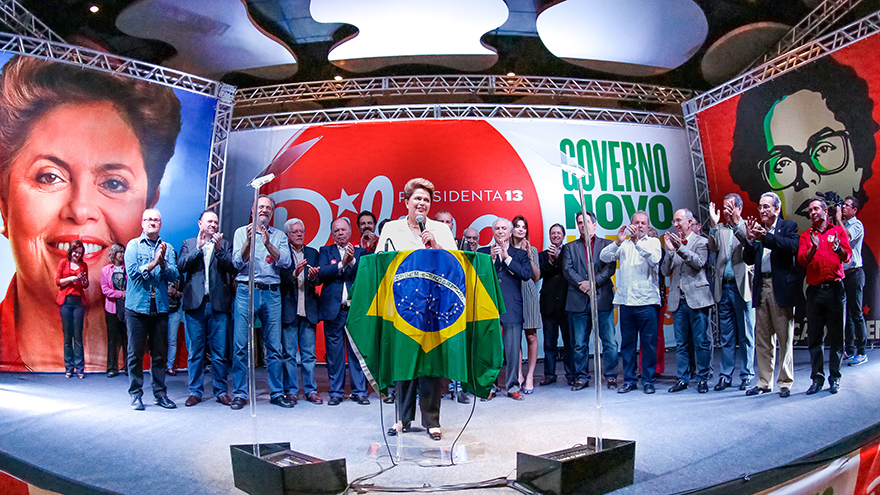 International investors are watching closely as Brazilians prepare to vote in the second round of the presidential election on October 26. Their vote will not only decide who will be the country’s next president; it may also determine the future of the Central Bank of Brazil (BCB), and therefore the country’s macroeconomic trajectory.

While the incumbent president, Dilma Rousseff, supports the BCB’s existing institutional framework, her opponents contend that monetary policy is plagued by political interference, which would best be addressed by giving the BCB greater autonomy. But no candidate has yet advanced a proposal for reform that would reduce the scope for political interference while ensuring greater accountability and promoting financial stability. If Brazil is to sustain strong and stable economic growth, the central bank will need an overhaul.

Monetary policy has long played an important role in Brazilian politics. During the democratization process of the 1980s and 1990s, successive governments tried to tame hyperinflation, which reached 2,477% in 1993. The introduction of the “Real plan,” launched in 1994, managed to suppress annual price growth to an “acceptable” 22% by the following year. Riding on the plan’s success, its architect, Fernando Henrique Cardoso, a former economy minister, was twice elected President (in 1994 and 1998), underscoring voter concern about price stability.

Today, as central bankers in developed countries fret about the threat of deflation, Brazilian politicians are once again forced to respond to widespread fears about slowing growth and a return to high inflation. Unfortunately, the presidential candidates’ plans for the BCB fall short of what is required. Historically, Rousseff’s Workers’ Party (PT) has resisted giving the bank formal autonomy, and she has played a distinctly populist card during the campaign, arguing that BCB autonomy would hand too much control to private bankers.

Marina Silva, the Socialist Party’s candidate, demanded formal bank independence – an argument subsequently adopted by the Social Democratic Party (PSDB) candidate, Aécio Neves, who now faces Rousseff in the election run-off. But Neves wants de facto, rather than formal, operational autonomy for the BCB. Like Cardoso, Neves is committed to inflation targeting, creating a primary surplus, and maintaining a floating exchange rate. While such policies may promote price stability, his proposal neglects the two most important issues for the BCB: legal autonomy and institutional reforms that ensure accountability to citizens.

A legal commitment to BCB autonomy would contribute to currency confidence in a way that informal autonomy cannot. Legal structures have a direct impact on inflation expectations, because law can provide institutional protection to public goods, such as price and financial stability. Properly designed and executed, institutional reform could also increase BCB accountability to society at large while guarding against undue political influence and lobbying by the big banks.

The BCB is ripe for reform. It is a 50-year-old technocratic bureaucracy established under a military dictatorship, with few legal instruments for political and social accountability. Institutional reform must therefore move beyond the BCB’s inadequate price-stability target, which is set according to a narrow inflation index that fails to reflect the experiences of ordinary Brazilian consumers. For example, the reported 2013 inflation rate was 5.9% (compared to a 4.5% target); but prices for food, a major share of most households’ budgets, rose by 8.4%, hitting the poor especially hard. The Rousseff administration has kept the reported inflation rate artificially low by suppressing prices for state-run services.

Price stability should be accompanied by other targets, especially financial stability, but also, possibly, employment. Rousseff thwarted Congress’s attempts to introduce such targets in 2011, and they would, of course, need to be carefully designed to avoid past mistakes. But, done right, an expanded range of criteria by which to assess BCB policies, by enhancing accountability, would strengthen the legitimacy of granting policymakers legal autonomy.

There is also scope for institutional reform to promote greater financial stability. The 2008 financial crisis and its aftermath highlighted the consequences of the BCB’s outdated institutional design. The Bank had insufficient legal backing for action needed to stabilize the financial system. This left then-President Luiz Inácio Lula da Silva, to resort to a series of dramatic measures, including the use of the deposit-insurance fund and state-owned banks to bail out failed financial institutions. Lula claimed that this ad hoc approach gave Brazil a degree of flexibility lacking in other countries; but it was not cost-free, as he claimed, and the results did not endure.

Rapid expansion of private debt raises other, larger concerns. Other central banks have recognized the need for new instruments to ensure financial stability; so must the BCB. Institutional clarity on the BCB’s mandate for financial stability and the instruments at its disposal could help Brazil avoid future crises – or at least weather them more effectively.

Brazil’s presidential election appears to offer two unsatisfying choices: a continuation of the status quo, with the BCB subject to political influence, under Rousseff; or an informally autonomous BCB with an outdated institutional apparatus, under Neves. Only Silva’s initial proposal included calls for institutional reform of monetary policy and financial regulation; and it is far from certain that her endorsement of Neves in the run-off will sway his view should he win.

Camila Villard Duran, a professor of law at the University of São Paulo, is an Oxford-Princeton Global Leaders Fellow in the Global Economic Governance Programme, University of Oxford

This piece first appeared in Project Syndicate, on 20 October 2014.
Democracy and politics Economy