Aligning national incentives to a global solution: a US energy surplus dividend 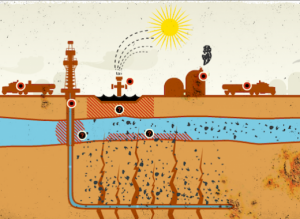 “Global problems require global solutions.” This truism is a favorite of politicians attending global summits and IR scholars alike. On one level it is of course correct. We will not solve a problem like climate change unless all major emitters agree to reduce emissions. But the phrase glosses over the way in which a global solution must cobble together a range of national interests. If we’ve learned one thing from 20 years of failed climate negotiations, it’s that a global solution must be compatible with the dominant interests in the relevant countries. If not, it will be neither “global” nor a “solution.”

To build a global solution we need to strengthen pro-climate interests in these countries. How can we do that? In another post I’ll discuss China, where rapidly rising discontent with urban air pollution offers a chance to significantly strengthen pro-climate policies. But here let me focus on the United States. Two recent reports (one from the World Resources Institute, one from the US Department of Energy) show that current trends will not lead to a substantial reduction in US emissions anytime soon. The WRI is at least optimistic that individual states and federal regulators possess tools to bring US emissions down somewhat in the medium term even without legislation, but, frankly, the gains they are pushing for would not be enough. We need to think more creatively about how to reach an inflection point in US carbon emissions, so I’d like to advance a modest proposal: an energy savings dividend that uses new gains in oil and gas extraction technology to fuel a clean energy bonanza.

According to the International Energy Association, North America is on course to produce more oil than it uses by 2030. Perhaps even more significantly, natural gas is rapidly replacing coal as the cheapest source of electricity. By cracking underground rock formations with a mixture of water and chemicals—“fracking”—prospectors have brought vast new oil and gas reserves into production. The United States will pass Russia as the world’s largest gas producer in 2015, and produce more oil than Saudi Arabia by 2017. We are seeing nothing short of an American energy revolution.

The implications for the economy and for geopolitics are radical. Americans will have access to cheaper energy, especially gas, and Asia will rapidly supplant the US as the chief buyer of oil from the Middle East.

But as revolutionary as American energy interdependence promises to be, it is overshadowed by the irreparable damage it will do to our climate. Natural gas plants in the US emit about half as much carbon dioxide to make the same amount of electricity as US coal plants. But even this major jump in efficiency will not be enough to put the US onto a sustainable track. The same kind of technological innovation that releases relatively clean gas also gives us access to the dirty Canadian tar sands. This massive reserve alone contains enough oil to, if it were burned overnight, increase the concentration of carbon dioxide in the Earth’s atmosphere by 50 percent.  Climate change makes increased reliance on fossil fuels, foreign or domestic, a far larger threat to our future prosperity and security than a war in the Middle East or an OPEC embargo.

In other words, there is only one path to real energy independence: to wean ourselves from dead dinosaur fuels, and rely instead on the wind, the sun, geothermal heat, moving water, nuclear, and other (nearly) inexhaustible supplies.

The American energy revolution, therefore, is both too good to pass up, and too dangerous to pursue. And yet, without political action, we might do both. With environmental interests in Washington and at the local level opposed to increased drilling, and with oil and coal companies investing billions in lobbying against sensible climate legislation, Washington is gridlocked.  We are on track to on the one hand, miss out on the gains from increased supply and on the other hand, incur all the costs climate change will bring.

What can be done? Just as a solar panel uses opposing charges to generate electric current, Congress can use smart policy to capture the gains of the American energy revolution while simultaneously making the investments we need to stop climate change and achieve real energy interdependence. Call it the “energy surplus dividend.”

The idea is to link new supply now with investment in unlimited supply in the future. The American energy revolution will make the real cost Americans pay for energy over the next 100 years lower than it otherwise would have been. This savings can be estimated, roughly, by taking the increased supply from fracking out of the equation. The difference between the energy revolution price and the (hypothetical) business-as-usual price is the energy surplus dividend, the wealth coming out of the ground that belongs to each of us.

What should we do with that bonus? Under business as usual, the market will divvy up the dividend between energy companies and consumers. Drivers need only look at the price of gas to understand who tends to get the lion share of benefits under that scenario (although natural gas has become significantly cheaper for US households).

Instead, smart policy could capture the energy surplus dividend and use it both to lower the real cost of energy for American households, drivers, and manufacturers, while at the same time investing in renewable power.

Let's take a third of the energy surplus dividend and give it right back to American households, drivers, businesses, and other energy consumers in the form of energy tax credits. And let’s take another third of the dividend and channel into clean energy R&D and subsidies for families, businesses, energy companies that choose to invest in wind, solar, and other technologies that need critical mass to reach market viability. We can then leave the market to figure out what to do with the remaining third, providing incentives for companies to make a profit out of new resources.

Because the proposal would not restrict supply or lead to a net tax on consumption, energy companies would have little to fear. Indeed, smart companies would see opportunities both to receive additional public support for their R&D efforts, and to reduce environmental opposition to new exploration and fracking by tying it to clean energy investments.

Good policy also makes good politics. By aligning the incentives of environmentalists, energy producers, and consumers, an energy surplus dividend can pave the way for a national-interest energy policy that serves the country well into the 21st century.

The devil, of course, is in the details. We need to estimate the baseline scenario accurately and fairly, and devise a way to capture the dividend most efficiently. But with the country at an impasse on climate and energy, turning the debate to technocratic questions would represent progress.

As with most trends, we should have invested in the transition from fossil fuels to renewable energy years ago. We’ll have to do it one day, and the longer we delay the more expensive it will become. The question is not "how long can we delay the inevitable?," but rather "how can we make this transition in the most efficient way?" An energy surplus dividend gives us a shortcut on the path to real energy independence.
Democracy and politics Climate
...
Economy