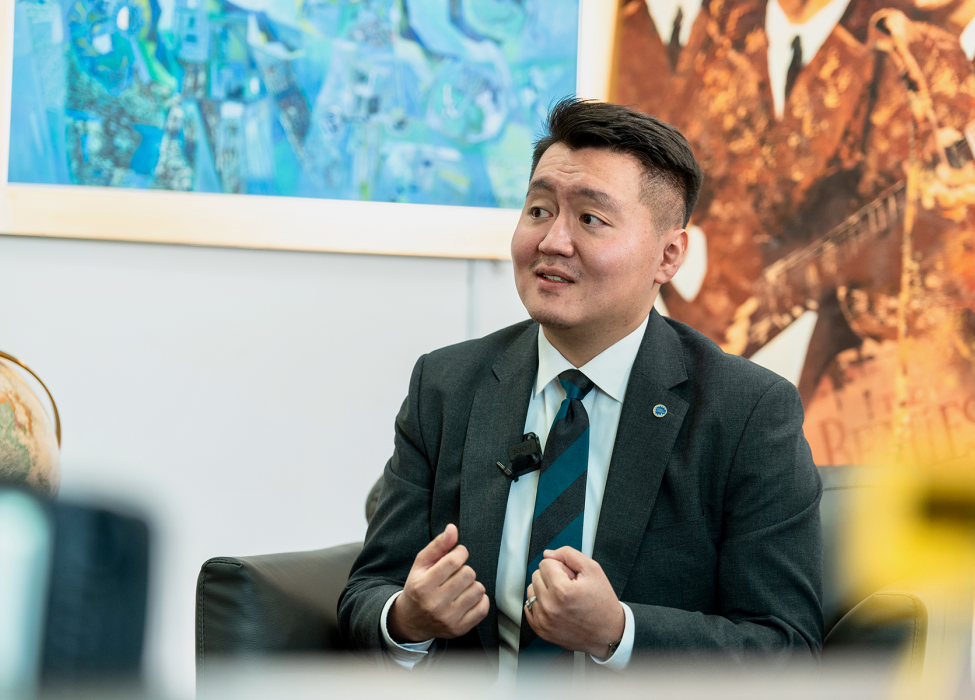 Commitment to public service runs in the family of Erdene Elbegdorj (MPP 2015). The son of a politician, Erdene harboured dreams of following in his father’s footsteps since childhood. However, growing up in a political family gave him an insight into the dedication required for a career in policymaking. “When I approached my father in high school to tell him I wanted to become a politician, he told me that it’s an immense sacrifice: your number one priority should be the citizens you serve.”

While maintaining his ultimate goal of wanting to make a positive difference in the lives of others, Erdene initially embarked on a different career path. In 2007, he went to the USA to study biological sciences, in preparation to pursue a career in medicine. Shortly after returning to Mongolia upon completion of his degree, Erdene was called to complete a year of national service. The three subsequent years he spent in the military, during which he spent time as part of the UN Peacekeeping Mission in South Sudan, crystallised Erdene’s desire to enter into politics: “In South Sudan, I witnessed the negative impact that failures in governance and policymaking can have on millions of people. Returning to Mongolia, I saw that there was room for improvement in my own country too.”

Erdene set his sights on studying at the Blavatnik School and was delighted to become part of the MPP class of 2015.

“The class number was exactly the right size: small enough to create meaningful connections with each of your classmates, and large enough that you benefit from the diversity of backgrounds and experience.”

With no previous experience in policymaking, an intensive one-year programme was ideal for Erdene.

“The MPP gave me the frameworks to analyse the policy failures that I witnessed in South Sudan and Mongolia, and the tools to seek solutions.”

In 2017, Erdene was elected as the Bayanzurkh District Citizen Representative, serving in one of the country’s most socioeconomically challenging districts. He conducted his election campaign via door knocking, visiting over 700 households in the allotted two-week campaigning time. Forging connections on the doorstep prepared Erdene for the locally engaged nature of the role, where his main responsibilities lie in organising community-based action and citizen engagement in democratic processes. In the upcoming 2020 election, Erdene intends to run for a city council position; this will allow him to directly influence policy, drawing on lessons from his time as a district representative. “The higher you go in politics, the easier it is to lose sight of people’s everyday challenges. As I progress in my political career, I hope to maintain the perspectives I’ve gained from investing in personal connections at this stage.”

Erdene is also involved in a number of regional leadership initiatives: as the Curator of the Global Shapers Community Ulaanbaatar, he has worked to tackle issues from poor car safety to youth engagement in politics and the stigma around mental health, and he was recently selected as an Asia Foundation Development Fellow in recognition of his innovative and entrepreneurial leadership. These projects are helping Erdene to develop his leadership skills and build on the strong global network he developed during his time at the Blavatnik School.

“At the Blavatnik School, I realised that most challenges that countries face are not national issues – they are global issues that require global responses and information sharing.”

As he engages with other young leaders and citizens from his local community, Erdene hopes to be able to counter the divisiveness of populist politics that is becoming increasingly prevalent across the globe.

“The Blavatnik School showed me that politics can be fuelled by hope. In my political career, I hope to build stable and enduring policy initiatives that demonstrate how effective policymaking can have a marked positive impact on people’s lives.”