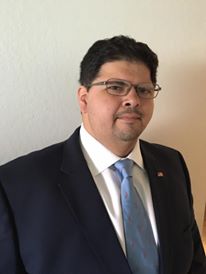 An entrepreneur with a passion for fintech, Jonathan Padilla (MPP 2016) is helping to build an inclusive financial system, the benefits of which will be felt across the globe. “With the development of digital technologies, we are seeing the next massive upheaval of the financial system,” he says. “We need to make sure that the new system is designed to lift people up and create opportunity.”

Jonathan is a Founding Partner of Coruscant Capital, which works on developing emerging technologies, such as blockchain, artificial intelligence and the Internet of Things. The company’s work has implications not just in the world of finance, but also in the green technology sphere. One of their current projects involves working with a firm in the American Midwest to build a virtual power plant, using distributed ledger technology to ensure maximum efficiency of energy consumption. “Imagine a group of houses in a certain geographic area, all equipped with solar cells and panels,” Jonathan explains. “The virtual power plant is the technology that lets these houses produce energy to the grid, as opposed to the centralised generation of energy that you get with a traditional coal-fired power plant.” The project, which is in its concept stage, is currently being tested in Illinois.

In addition to his work with Coruscant, Jonathan is also an Associate Director at the Stanford Future of Digital Currency Initiative, based at Stanford’s School of Engineering. The initiative began as a Coruscant project, before evolving into an independent programme. “We’re working alongside the International Telecommunications Union [ITU – the UN’s telecommunications arm] as it expands its remit into the world of fintech.” The programme carries out research on digital currency in central banking, with three main objectives: standardisation, engagement and innovation. “We currently work with central banks in 35 countries, convening delegates from these banks biannually and helping them deploy new technologies in the fields of digital currency and emerging tech.” The job requires Jonathan to have a sufficient grasp of both technology and finance, as he acts as a bridge between technologists at the ITU and financial specialists from central banks.

“Having covered multiple disciplines on the MPP, I can work effectively across sectors and understand varying professional perspectives.”

Had it not been for the MPP, Jonathan’s career trajectory may have taken a very different path, as he originally planned to pursue a career in law. However, conversations about blockchain technology with an MPP classmate, Ryan Terribilini (MPP 2016), sparked his interest in the opportunities presented by fintech.

“I learnt about most of what I’m working on now from my time at the Blavatnik School and discussions with classmates.”

Jonathan used the summer project to challenge himself, applying what he had learnt throughout the year in an unfamiliar environment. He went to Kenya and worked on policy issues around M-PESA, a mobile phone-based payment system that is widely used across the country.

“Working to understand the payment space in Sub-Saharan Africa during my summer project has been incredibly valuable to the work I’m doing now.”

After completing the MPP, Jonathan spent a year studying at Tsinghua University, China as a Schwarzman Scholar. His dissertation examined the regulation of digital assets and was used by the Financial Stability Board of the G20 in 2018 as they approached regulation on Bitcoin and related policy issues. “I took what I had learnt speaking to Ryan on the MPP and built on that. Nobody was thinking about the issues from the government perspective, so I tried to fill that gap. It helped me build my reputation for when I returned to the US to work.”

Looking back on his time on the MPP, Jonathan places great value on the bonds he made with his classmates: “The MPP brings together a wonderful, eclectic group of people from different disciplines and from all over the world.” Having studied in the United States at undergraduate level, Jonathan was excited to gain new international perspectives by studying in Oxford: “Studying at the Blavatnik School gives you an international perspective that you don’t get at American schools.”

“In the US, we need to think and act more collaboratively with other countries in various policy areas, from social justice to the environment, and thanks to the MPP I feel better equipped to push for that in the policy area I’m working in thanks to the MPP.”

Jonathan recently joined PayPal as Head of Blockchain Strategy and is looking forward to the opportunity to lead a technology team working on ways to make the digital economy more inclusive. Across all of his projects, Jonathan is inspired by the political philosophy of Robert F Kennedy.

“I follow the belief that we are called to be moral leaders and envision how to make the world a better place. This belief drives my work, and it aligns with the Blavatnik School’s mission of creating a world better led, served and governed.”