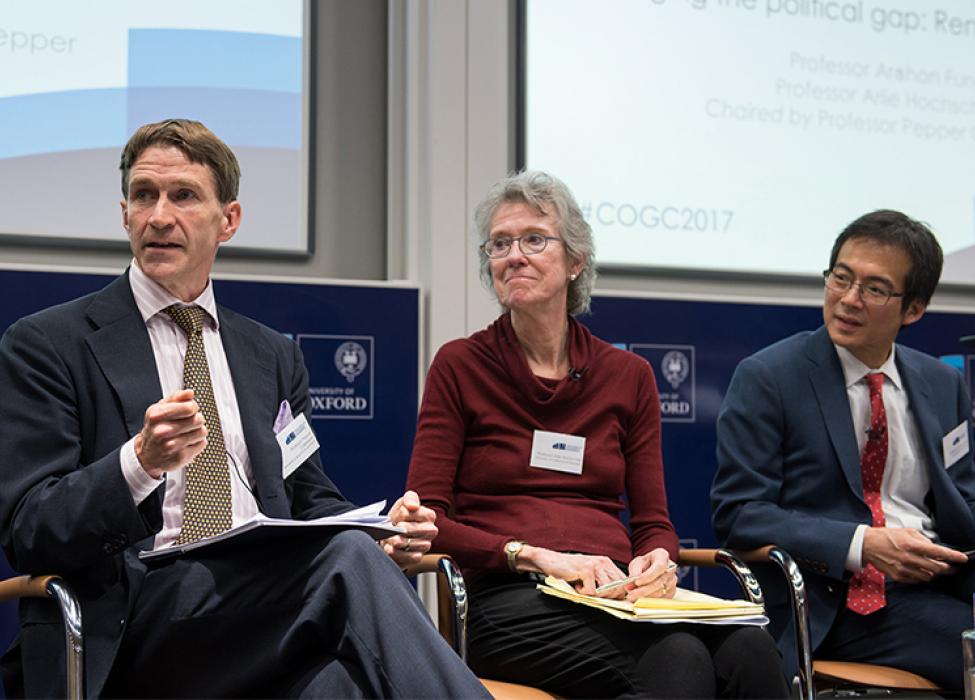 How far does business influence policy outcomes within democracies? What form does this influence take? And how has financial regulation since the crisis of 2007/8 changed the interaction between business and society as a whole? These are just some of the questions which Pepper Culpepper, Professor of Politics and Public Policy at the Blavatnik School, seeks to answer in his research.

Pepper is a political scientist whose research focuses on the allocation of power within political democracies. His 2011 book Quiet Politics and Business Power (Cambridge University Press) demonstrates how business influences policy outcomes more often than traditional theories based on the preferences of the electorate would suggest. While these theories propose that the median voter’s preferences would become policy, Pepper’s work illustrates that businesses and organised financial groups carry great weight with policymakers, who defer to their ability to create jobs and employment. Policymakers are concerned that if they businesses are dissatisfied with policy, they may make different investment decisions, potentially choosing to exit a political economy or region. This capacity to affect decision-making through anticipated investment decisions, rather than through direct lobbying, is referred to as ‘structural power’.

Focusing on corporate governance regulation – the rules that govern companies – Pepper has shown how business interests prevails a large proportion of the time. However, he found that when issues acquire political salience through voters becoming concerned about them, the focus of politicians switches to their constituents.

When salience is high, you can get a counter-balancing of the structural advantages that business has in capitalist democracies to get what it wants.

Since the publication of Quiet Politics, Pepper’s work has continued to examine this question, looking at how the regulation which followed the financial crisis came to be, and the extent to which such laws reflect the views of voters, as opposed to the desires of banks. To strengthen a democracy, it is essential to bring to light the sources of power within it and understand the influence carried by financial institutions, he argues.

Economic organisations have a role to play in supporting an economy. When you have a negative feedback effect with people decrying banks and ineffectual regulation, then getting angrier and angrier about banks, it contributes to the appeals of populist parties or politicians.

Pepper states that populist appeals – whether from anti-establishment parties, or from politicians within centrist parties – often present simplistic solutions to complex problems. As simplistic appeals are difficult to translate into effective policy, this phenomenon can trigger a feedback loop in which failures of policy can further amplify the anger of voters. Society can’t do without banks, so the question is how to achieve appropriate levels of democratic control of these institutions on which we all depend.

Public opinion and how it affects financial institutions’ influence on policy-making is another key area of his research. He wants to understand how public opinion can offset the structural power of business and is moving in his current research towards a broader comparison of five countries that are home to world’s largest banks. This research asks how press coverage can influence public opinion about business and financial organisations. This work builds on an initial study of the United States and the United Kingdom in which survey respondents were given a short article highlighting perceived scandals from the 2007/8 financial crisis. The effects of reading the piece on the American participants’ approach to state intervention were dramatic.

Their anger towards banks increased, their laissez-faire attitudes declined and they thought there should be more state regulation of financial institutions.

Alongside his projects on financial regulation and public opinion, Pepper is also working with a co-author on a piece examining the structural power of companies like Amazon, Google and Uber, which play a central role in the economy. He aims to find out how the public thinks about the economic might of these companies, how they enlist the political support of consumers, and how that public support varies over time and in response to perceived scandals or threats of regulatory intervention.