More than a Women’s March: A movement for representation and justice for all 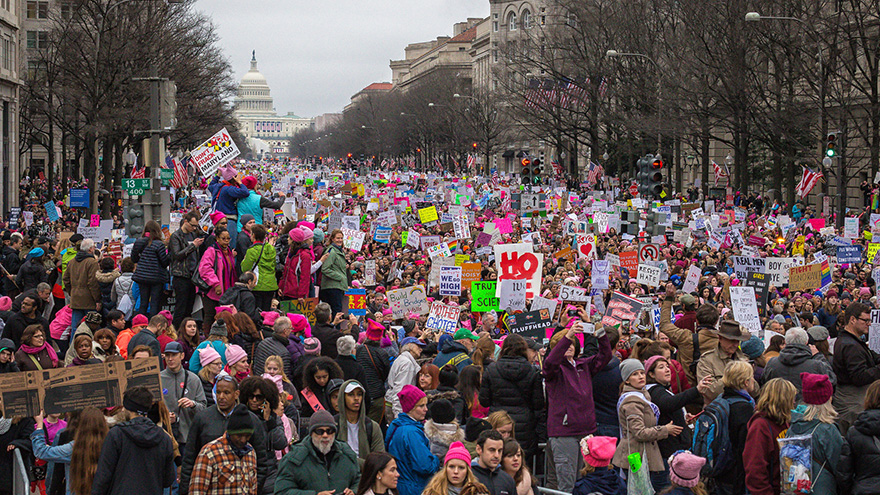 Friday, 20 January 2017, marked the beginning of a new era in American politics and global history. Thousands gathered on the National Mall in Washington, D.C., to celebrate the inauguration of Donald Trump, 45th President of the United States, and participate in the festivities of the day.

Inauguration Day is a holiday for many here in Washington, D.C.  However, instead of joining the hundreds of thousands of people who descended upon the National Mall, I chose to use Inauguration Day to read, work, and reflect upon all that had transpired since I voted in the November 2016 Presidential election. This monumental change in our history would precede countless challenges ahead, and these challenges arrived much more quickly than I anticipated. Shortly after the inaugural oath had been taken at noon and congratulations made, the White House wasted no time in communicating the issues and priorities of the new presidential administration with a new White House website. These issues include jobs and economic growth, strengthening the military, “America First” policies for trade, energy, and foreign policy, and increased support for law enforcement.

All of these, of course, are priorities of concern to all Americans. However, no information exists on the new White House website regarding the administration’s commitment to supporting a host of other crucial issues in domestic social policy. Completely omitted from the new website are mentions of issue platforms such as health care; education; civil rights; disabilities; ethics, lesbian, gay, bisexual and transgender (LGBT); and women. A strong commitment to inclusiveness in domestic social policy will help ensure the success of the policy issues prioritised by President Trump. However, achieving the President’s policy goals will likely prove difficult in the absence of inclusive domestic policy goals and solutions that embrace our diverse population.

Barack Obama, 44th President of the United States, stated that "with passion and courage, women have taught us that when we band together to advocate for our highest ideals, we can advance our common well-being and strengthen the fabric of our nation." Accordingly, the Women’s March, initially planned as exactly that – a march in support of women’s rights – was so much more than a march for women. The Women’s March – millions strong around the world – made the bold statement that the rights of the women, minorities, gay, children, poor, sick, disabled, disenfranchised, elderly, scientists and all others who fall outside of the mainstream majority will not be forgotten.

Americans who are in poor health or do not have ready access to basic health care are less likely to optimally contribute to the work force in a way essential to advancing President Trump’s vision for America. “Health and the Economy: The Impact of Wellness on Workforce Productivity in Global Markets,” a study by the United States Chamber of Commerce, discusses the negative impact of impaired health and lack of access to care in a substantial number of a country’s individuals on economic growth in terms of lost productivity. So far, the enactment of a replacement law (as promised during the Presidential campaign) for the Patient Protection and Affordable Care Act has yet to occur. Equal access to quality education is needed if Americans want to lead productive lives so that they can optimally contribute to building a better America. It is also necessary for the US to remain competitive and lead in global innovation. The Department of Education’s “STEM 2026: a Vision for Innovation in STEM Education” offers suggestions for bolstering public education to prepare all children for this proposed reality. Yet, the future of programmes such as these is in doubt without a firm commitment from this administration to improving the nation’s public schools.

The Civil Rights Act of 1964 addresses voting rights, equal access, and non-discrimination. These rights ensure that we are all protected in terms of basic human dignity, which is essential for us all to contribute to society at our highest levels of potential and capability. However, the Department of Justice may soon have an Attorney General whose commitment and allegiance to these values have endured harsh criticism from respected, established civil rights entities. The hallmark Americans with Disabilities Act protects those with disabilities, providing accommodations and assuring the disabled that their talents and gifts will not be ignored or marginalised. Yet, the current administration has yet to make amends with the disabled community after the humiliation they suffered during the Presidential campaign.

Ethics regulations are needed to ensure our government’s actions are in keeping with the highest levels of integrity and devoid of conflicts of interest. Yet, Congress began the current session with an attempt  to eliminate the Office of Congressional Ethics. It is commendable that President Trump rebuked this activity and that efforts to dismantle the Office of Congressional Ethics were ultimately unsuccessful. Still, conflicts of interests concerning prior business entanglements have dogged the current administration and may take considerable time to resolve. No word on support for LGBT concerns, highlighted by the repeal of “Don’t Ask, Don’t Tell” and historic legalisation of gay marriage, has been issued, generating considerable unease within the LGBT community. Finally, of course, a maelstrom of worries regarding support for women’s issues (bolstered by landmark legislation of the Lilly Ledbetter Fair Pay Act, Violence Against Women Act, and the establishment and groundbreaking work of the White House Council on Women and Girls) is ever-present.

Ignoring and failing to acknowledge our differences simply does not work for the long-term growth of the United States or for its status as a leading contributor on the world stage. As I walked down Independence Avenue amidst thousands of others for the Women’s March, I reflected upon the fact that there is overwhelming strength and power in inclusiveness and diversity. Many believe that embracing diversity plunges our nation into “identity politics” that further divides us, but nothing could be further from the truth. In fact, studies have shown the added value of diversity within populations, from basic studies highlighted by Charles Darwin in Origin of the Species to more recent studies reinforcing the benefits of diversity and inclusiveness. These findings show that diversity fosters growth, engenders creativity, inspires new ideas, promotes the generation and maintenance of a competitive edge, prompts behavioural change, and encourages accurate representation of the concerns of people in society. More simply put, in the words of United States President Abraham Lincoln: “A house divided against itself cannot stand.” We must come together by engaging in honest, open dialogue with one another about our differences and celebrating how our differences can be used optimally to work together to strengthen social policy to build a stronger America.

Dorkina Myrick is a physician-scientist and former Congressional staffer from the United States of America. She is also an alumna of the Blavatnik School of Government (MPP Class of 2015). She may be found on Twitter.
Global cooperation Inclusion
...
Law Democracy and politics